Frankfurt U3 and CRRC light rail vehicles for the Monterrey metro 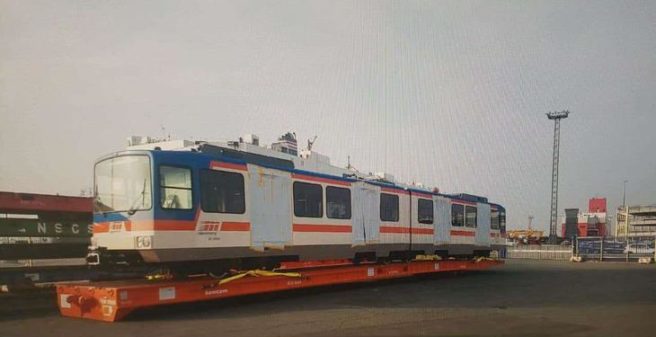 The first modernised U3 light rail vehicle for Monterrey in Bremerhaven I © Info7.mx

The first four modernised U3 light rail vehicles were shipped this week from Bremerhaven to Mexico on a ship called “Hoegh Yokohama”. The U3 light rail vehicles, which were taken out of service in Frankfurt/Main some years ago, were modernised by the Aachen-based company Talbot Services (see below). The 40-year-old vehicles were fitted with a new roof-mounted air conditioning, a new seat layout and the blue, white and red colour scheme of Metrorrey, the metro of the North Mexican city of Monterrey. It is likely that one of the two driver’s cabs was removed, as the trains will be operated in double traction from now on.

The 24 cars are intended to increase the fleet for the forthcoming opening of Line 3. It is planned that the new trains will arrive in Altamira Mexico on 7 November 2020 and will then be transported by flatbed truck to Monterrey to be prepared for operation. The movements of the ship can be followed on the following page:

In addition to the 24 ex Frankfurt vehicles, the delivery of 26 new CRRC Zhuzhou Locomotive vehicles is scheduled to start in November 2020. CRRC Zhuzhou has already produced articulated high-floor light rail vehicles for Izmir in Turkey with “B-car” dimensions in the past. The order for Monterrey is the first ever CRRC vehicle delivery to Mexico.

Once all upgraded and new rolling stock has arrived in Monterrey, it is understood that the new Line 3 will be commissioned in the first half of February.

Metrorrey, the metro operator of the Northern-Mexican city of Monterrey in Nuevo Léon recently signed a contract to purchase 24 second hand light rail vehicles from the German city of Frankfurt/ Main. The trains have been taken out of service in Frankfurt some time ago and fit perfectly the requirements of Monterrey’s system. The dimensions are identical to the “B-type” high-floor trains in service in Monterrey.

After negotiations during 2018, an agreement between the two operators Metrorrey and VGF Frankfurt was signed in November 2018. Initially, the refurbishment contract was given to the company Ferrostal, but to several reasons the company withdraw from the contract. Earlier this year, the Aachen-based railway and transportation manufacturer Talbot Services, formally part of Bombardier, was contracted with the remanufacturing of the trains.

The 1979- and 1980-built vehicles have been designed and built by DUEWAG, the former West-German tram and light-rail manufacturer from Düsseldorf which is now part of Siemens. The so-called U3-type vehicles were mainly operated on lines U4 and U6 on the network of VGF (Verkehrs Gesellschaft Frankfurt) until their replacement by Bombardier-built U5-type vehicles.

Each U3 train has a length of 25.68 m and a width of 2.65 m with 64 seats and 182 standee places. Of the entire initial fleet, three vehicles will remain in Frankfurt as historical trains and the 24 remaining vehicles have been sold to Monterrey.

In order to comply with all requirements in terms of comfort, safety, performance and efficiency, the vehicles will be remanufactured including a new propulsion chain. The cost will be 1.6 million EUR per vehicle, or 38.4 million EUR in total, which Metrorrey will have to pay within 30 months. According to local media reports, the value per train has even been increased to 1.7 million EUR. This sum is still much more economic than purchasing new-built vehicles which are estimated to cost more than twice. Furthermore, the vehicles will be fitted with WiFi, air conditioning, new wheels, LED lighting, new floors and interior, modern passenger information displays, new cabling, camera systems and the ETCS signalling system.

Thanks to the full refurbishment, the life cycle of the trains will be extended by 20 years. The “new” rolling stock will be used to increase frequencies and services on lines 1 and 2 which is expected to receive an additional demand after the opening of line 3 which will be operated with 26 new-built vehicles.

Talbot Services is the general contractor for the project with the engineering company Prose for the mechanical scope and Schaltbau Refurbishment for the electrical scope. The first two vehicles are planned to be shipped to Mexico in August 2020 with the remainder to be shipped in groups of four trains step by step.

Monterrey’s Metro, generally referred to as Metrorrey, is a fully grade-separated high-floor light rail system which currently consists in two lines. The network has a length of 32 km. A third line is under construction. It will be a 7.5 km extension of the current line 2 which will then form an “U-shape”. The inauguration is planned for 2020 although the infrastructure is almost completed according to media reports.

Metrorrey’s first line opened in 1991, line 2 followed in 1994. The entire network is operated with 84 articulated 2-car trains of which some are running in double- or triple-tractions. In terms of ridership, the system is a full success. In 2017, a total of 177.6 million passengers were transported, corresponding to an average daily ridership of 467,000 passengers for both lines.

The so-called railcar manufacturer Waggonfabrik Talbot was founded in Aachen, Germany, in 1838. The company was one of the first rail manufacturers in Germany and also supplied railcars to the Dutch State Railways (Nederlandse Spoorwegen).

In the 1990s the company developed the Talent (which stands for Talbot EMU which gives in german “Talbot Elektrischer Nahverkehrs Triebwagen”). Later, Talbot was acquired by Bombardier. Bombardier announced the closure of the factory in 2012. From 2013 the plant operated under the company Talbot Services, providing rail vehicle maintenance and electric vehicles of which the DHL’s and Deutsche Post’s StreetScooter is the most prominent example. ScreetScooter has been purchased by DHL in the meantime.

A network map and more pictures can be found under the following link: