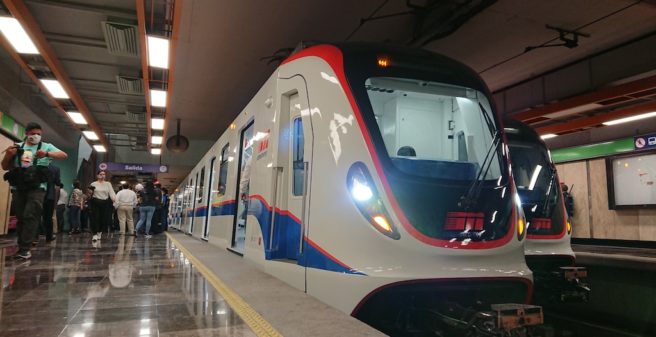 On 27 February 2021, Monterrey’s third metro line has been inaugurated. It is a 7.5 km extension of the current line 2, which now forms a “U-shape”. The infrastructure had been completed for several years already. On the occasion of the opening, the new six-axle light rail vehicles purchased from CRRC, China, have been operated for the very first time, but they are not yet in regular service. Also the 24 U3 light rail vehicles taken over from Frankfurt/ Main, which were modernised at Talbot Services in Aachen, are not in commercial service yet. However, test drives have started and it is planned to start operation.

A video of the inauguration and the new line is available here:

From the previous southern terminus of Line 2 in General Zaragoza, the line runs 800 m in a tunnel and is then led to the surface. The remaining 6.7 km of the line was built entirely as a viaduct. All seven stations are thus elevated. The line connects the Barrio Antiguo, the old town of Monterrey, with the Hospital Metropolitano and Nogalar in the northeast. At the Félix U. Gómez station, it is possible to change to line 1. Lines 2 and 3 are initially operated as one line and are connected at Zaragoza station.

There is also a connection to the Ecovía Bus Rapid Transit (BRT) system at Ruiz Cortines station. At the Hospital Metropolitano terminus, it is also possible to change to three BRT feeder lines (Transmetro), which are operated by 84 new natural gas buses.

Builders of the new line are the state of Nuevo León and the metro operator Metrorrey. The line colour of line 3 is orange.

According to public information, up to 300,000 passengers per day are expected on the new line. Shortly after the opening, the trains of the new line were still very empty, according to newspaper reports, which may be due to the minibuses still running in parallel and the restrictions of the Covid-19 pandemic.

The history of line 3

The first plans about the construction of line 3 began in 2008 with the aim of connecting the district of Apodaca, which is located northeast of Monterrey and has a population of almost 400,000. However, the line that has now been opened only serves roughly a third of this route, which may also explain the low passenger numbers. Construction began in October 2013 and was originally scheduled to be completed by 2015. The original construction costs amounted to 5.7 billion pesos (approx. 232.6 million euros), which would correspond to construction costs of over 32 million euros per kilometre (!). According to independent sources, the cost even doubled until 2020.

After years of delays, the track work was completed in 2019 – but due to a lack of vehicles, the line was not put into operation. With the completion of the stations and commissioning of the new CRRC trains at the end of 2020, Metrorrey was eventually able to inaugurate the line on 27 February 2021 – after five and a half years of delay and once again increased construction costs. Exact figures are not available.

There are plans to extend Line 3 to the south and thus operate it as an independent line. In this scenario, Line 2 would be extended to the Santa Lucia station of Line 3. A corresponding timetable for this project does not yet exist.