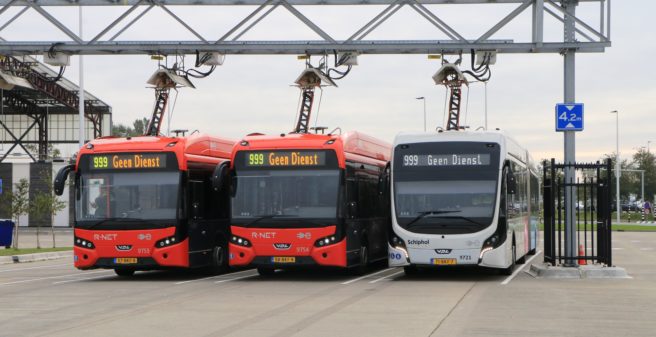 When you arrive at Amsterdam Schiphol airport and leave the terminal building to catch a bus, it is virtually unavoidable to spot them: The fleet of 100 VDL articulated electric buses operating on the Amstelland-Meerlanden network South of Netherland’s capital city. Every few minutes one or more of these vehicles arrives and departs from the bus station.

It was called Europe’s largest 100% electric bus fleet when operation officially started just two years ago on 1 April 2018,although this claim might not be totally true in light of  100% electric trolleybus operators in other cities. Nevertheless, it was a most remarkable achievement to introduce such full-blown battery electric bus operations.

The new buses gradually took over all duties on the network, which is operated by Connexxion and which is for practical reasonsdivided into two different networks: The so-called R-Net includes the routes 242, 342, 347 and 347 with a total length of 78 km. The so-called Schipholnet provides services on bus routes 180, 181, 185, 186, 187, 190, 191, 194, 195, 198, 199 and 287. Each „net“ uses a slightly different body design of vehicles. Therefore, the fleet of the 100 VDL Citea SLFA-181 Electric articulated buses can be distinguished in design and livery: 49 are mainly painted in red colours and have three wide doors while the other 51 are painted in a light-grey, the “BRT design”. The latter have a different front end, a single front door only but four doors over the total length of the vehicle. Electric equipment including the traction motor is provided by Siemens, motor power is 210 kW. The battery capacity is 169 kWh. All buses are maintained at Connexxion‘s Amstelveen and Schiphol Cateringweg depots where they are charged slowly overnight at 30 kW and during the day at opportunity charging stations at 420 kW. Four of the quick chargers are installed at both depots as well as at Schiphol Parking P30 and the bus station Knooppunt Noord. Once charged, which takes 20-30 minutes, the batteries allow for a maximum distance of approximately 80 km. All regular charging is managed by the use of the roof-mounted Schunk pantographs.

The red buses are used on the R-Net lines while the BRT design buses serve the Schipholnet. The electric buses show a good performance and have been very well received by the commuters who enjoy a silent, smooth ride experience. And as there are still many diesel buses in use on other lines it is easy to compare.

Just recently, Amsterdam‘s city public transport company GVB Gemeente Vervoerbedrijf Amsterdam has also started using VDL’s electric buses. A fleet of 31 such vehicles will be supplied, thereof 22 articulated ones and the first of them started revenue service on 2 April 2020 on route 22. The articulated vehicles Citea SLFA-180, are equipped with a 288 kWh battery system, and the Citea SLF-120 have a 216 kWh battery. Body design of the articulated version is similar to the Citea buses in use on the R-Net. GVB’s ebuses are recharged by seven Heliox OC 450 kW rapid opportunity chargers at Sloterdijk station. Over night, the batteries will be fully recharged with 31 slow chargers at GVB’s Garage West depot. GVB has the long-term plan to convert all its bus services into electric operations driven also by the country-wide policy which allows only the purchase of emission-free buses from 2025 onwards. For GVB this means the purchase of a total of approximately 200 buses. An option for 69 additional VDL buses was already agreed upon for the time after the supply contract for the new 31 vehicles is fulfilled.

It is worth mentioning that – since 2016 already – electrc buses in regular use can be watched at the airport itself as a fleet of 35 BYD 12-meter battery buses provides airfield services.