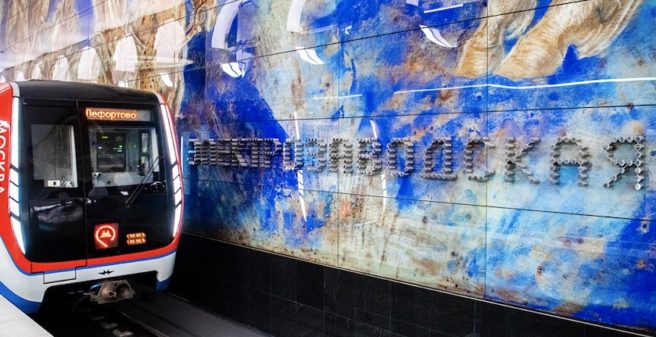 On 31 December, the new Elektrozavodskaya station went into operation, which will also be part of the new ring line in the future - here with a Transvagonmash train of the class 81-765 I © Official Site of the Mayor of Moscow/ www.mos.ru

In December 2020, a number of stations of Moscow’s metro have been opened. The probably most important inauguration is the new Elektrozavodskaya station of lines 11/ 15 which will also be part of the so-called Grand Circle Line, which is due to be completed in 2022 – 2023 and which will most probably be the largest metro circle line in the world (see below).

The Moscow metro has a system length of 408 km with 17 lines including a monorail and the new circle line which makes it one of the largest metro networks of the world. The track gauge is 1.520 mm. The metro is transporting ca. 2.8 billion passengers per year or 8 – 9 million passengers per weekday. Beside the city of Moscow also the neighbouring cities Krasnogorsk, Reutov, Lyubertsy and Kotelniki are served. Moscow only has over 12.5 million inhabitants.

On 1 January 2021 the Moscow Metro employed female metro drivers for the first time. Legislation prohibiting women from holding certain jobs was changed in September last year. This means that Russian women are eligible for driver positions in Moscow from 1 January 2021.

The Russian government had banned women from 456 jobs in 38 industries that require physically demanding work such as heavy lifting. However, an update of this law reduced the list of occupations barred to women to 98.

Metro trains have traditionally been operated by men, as the profession was deemed by the government to be harmful to women’s health. Different newspapers such as the Guardian reported that the reasoning for excluding women was that the job was too dangerous as it had to be done metro for long periods. This has been criticised because the network also employs female cleaners and cashiers.

The transport ministry in the Russian capital explained that the restrictions no longer apply due to the high level of automation of the network. Operating trains is no longer “associated with heavy physical exertion”, the ministry said.

On 12 December, Delovoy Tsentr station was reopened. Line 8A terminus was inaugurated on 31 January 2014 as part of line’s first section (Delovoy Tsentr-Park Pobedy), but was closed on 24 February 2018 after line’s extension to Rasskazovka station due to lack of turnback sidings. Instead, Line 8A services were diverted to Savelovskaya station.

In order to restore the services, 1,4 km of new tunnels were bored beyond the station, with a depth between 20 and 54 m. They will be used not just for turnback sidings, but also as the reserve for future connection of Kalininskaya & Solntsevskaya lines (line 8).

On 29 December, the new interchange corridor was opened between Dinamo station of Zamoskvoretskaya line (or line 2) and Petrovskiy Park station of Grand Circle line (or line 11). The latter was opened on 26 February 2018 and is located near VTB Arena, the home ground of Dynamo football and hockey clubs. However, the direct interchange wasn’t ready at that time and to change the lines, passengers were required to get to the ground level and exit the station first, before entering another.

The construction of the 130m corridor lasted for 2 more years and was faced with difficult ground conditions. Metro workers used a freezing method for ground stabilization around the area of almost 200 m2 and then bored through the frozen soil at the depth of 35 m with exact precision.

The opening of the corridor will ease transfer between Petrovskiy Park and Dinamo stations and reduce the pressure on the Circle line (line 5). It is predicted that 245,000 passengers will use this hub daily.

The new Elektrozavodskaya is also the fourth station on line 11’s eastern section and has an interchange with Arbatsko–Pokrovskaya line (line 3).

The depth of the new station is 20 m, which is 11,5 m higher than the existing one. The grand 163 m wide historical panel called The Battle of the Heroes decorates one of the walls at the platform hall of the new station. It depicts a collective image of the defender of Ancient Russia. The panel is made on glass using multicolor printing technique. With the combination of the station’s other decorative elements – lightning and volumetric structures – it allows to create the complete spatial composition.

A video of the construction and respective inauguration of the station can be found here:

Two stations entrances are planned with the new stations – the northern ticket hall at Golyanovskiy Proyezd with the access to lines 3 & 11 and southern ticket hall – at Sememovskaya Naberezhnaya, on the bank of the Yauza River. Also, the new transport hub will be created, which will include both metro stations, a surface transport stop, metro park & ride facilities and a railway station, part of future MCD-3 and MCD-5 commuter rail lines. At the same time, the construction of the interchange corridor between lines 3 & 11 will last until 2022.

Elektrozavodskaya station is currently served by Nekrasovskaya line 15 and will remain to serve by line 15 until 2022-2023, when the 7.2 km northern section of line 11 between this station and Savelovskaya will be completed. After that, Elektrozavodskaya-Nizhegorodskaya section will be transferred to the Grand Circle line which could become the longest circular metro line in the world with a total length of 70 km and a total of 31 stations. It well then surpass the current ‘champion’ among metro rings which is currently the Second Ring Line of the Beijing metro (57 km).

The first ideas to build the in Moscow date back to 1985. But due to the lack of resources and other reasons, the project was not started for 25 years. The decision to begin the construction of the BLV was made by the Mayor of Moscow Sergey Sobyanin in 2011. Work started in November of the same year.

Furhter information on Moscow’s metro can be found here: