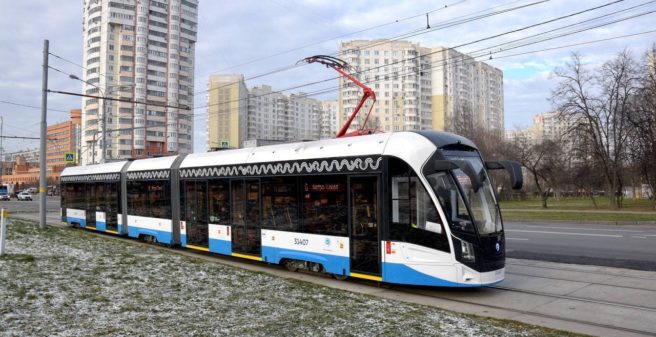 Moscow started a comprehensive renewal programme for its extensive tramway network already a few years ago. Now, more than have of the fleet has already been replaced by modern, Russian-built low-floor vehicles. The most wide-spread model now is the „71-931 M – Vityaz Moscow”, a three-section, single-ended 100% low-floor tramcar designed by LLC “PK Transportnye Sistemy” (PK TS) and manufactured in a joint venture operation between PK TS and Transmashholding in Tver.

For lines with lower passenger demand, 90 single-section, four-axle tramcars were ordered from the consortium Sinara-Transportnye Mashiny (STM), they were to be manufactured by subcontractors. The single-section model 71-911EM offered has a total capacity of 110 passengers, 40 of which are seated. A pre-production tramcar of this model was already delivered to the capital in April 2021. However, as further delivery did not start on time, after several months of delay and varios complaints, Moscow Metro eventually cancelled the contract. The contract will be re-tendered shortly. In the meantime PK Transportnye Sistemy had already delivered 40 single-section vehicles under a separate contract.

All these new vehicles replace, among others, large numbers of Tatra T3SU four-wheel trams which face the end of their operating live, often after more than 30 years of service in Moscow’s particularly harsh winter conditions. By 2023 all Moscow trams should be low-floor.

Track renewal, in part including re-design of the street layout, upgrading of the tramway stops, improving interchange facilities, barrier free access to the trams are improved passenger information systems are also part of the renewal programme. The tramway infrastructure maintenance has been handed over to Moscow Metro, in order to generate synergies and save costs. Approximately 210 million passengers per year (in 2019) underline the importance which the tramway operation has for the city and its public transport network – today still among the top 4 largest networks in the world.