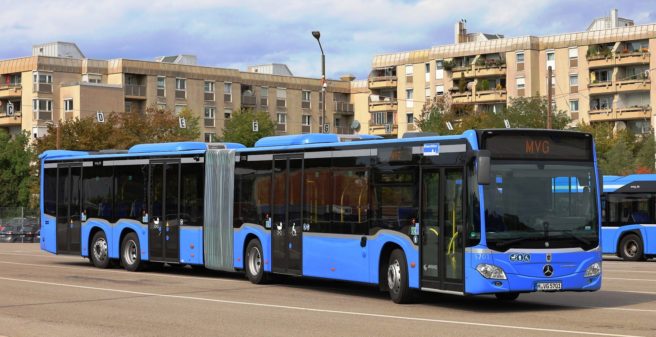 Munich is considered a stronghold for the use of the so-called “bus-trains”, composed of 12-meter diesel buses coupled with a passenger trailer. They are preferably used on lines where the capacity of conventional articulated buses is considered insufficient.

Munich’s operator MVG noticed that no battery-electric buses suitable for trailer operation are cuurently available in the market. This does not have to be forever, but in order to have to fall back on alternatives, the MVG starts testing the Mercedes Benz’ longer, four-axle version of the articulated bus branded “CapaCity”.

Already back in 2017 such a bus was in the Bavarian capital for demonstration purposes. Now the new bus numbered 5701 starts revenue service on 5 October 2020. Munich’s bus network is to be improved and expanded, therefor high capacity vehicles will be needed also in the future.

With just over 19.7 metres, the CapaCity is almost two metres longer than a conventional articulated bus. It can accommodate around 115 passengers. Passenger capacity is thus just between a “bus-train” (bus with trailer) and an articulated bus, i.e. between 130 and 100 passengers respectively.

“The extra-long articulated bus is an alternative for routes where normal articulated buses reach their capacity limits. The bus trains could certainly remedy this situation. However, there is no prospect of bus trains being electrified in the near future. The “CapaCity” does offer this perspective” says MVG CEO Info Wortmann.

The interior of the bus is specially adapted to the needs of the MVG. Wide corridors and very large entrance areas at the doors should ensure a smooth change of passengers at the stops and a good distribution of passengers within the bus.

The four-axle CapaCity has been used by various transport companies throughout Europe for years.