Nancy: Final decision about the conversion into a modern tramway 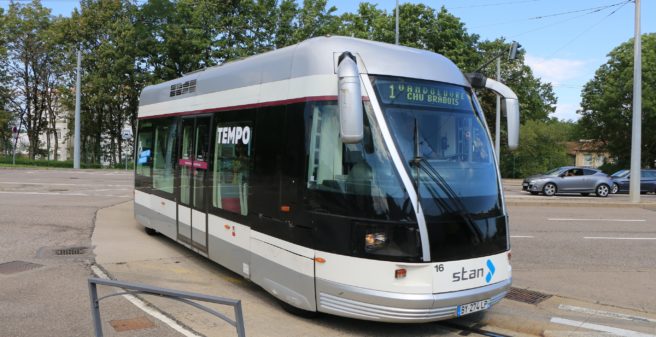 Today's TVR will be replaced by a tramway | © D. Budach

After previous public hearings and numerous discussions at various levels over the years, the Déclaration d’Utilité Publique for the planned conversion of the track-guided trolleybus (TVR) to conventional tram operation in Nancy was officially published on 12 February 2020. Start of construction is scheduled for later this year. This is also a decision about the guided trolleybus operation: Service will finally cease at the end of 2021. During a two-year transition period, articulated diesel buses will provide the service, partly using parallel roads to the existing TVR route.

In the course of 2020, new low-floor tramcars with a total capacity of 300 passengers each are to be tendered. Current passenger numbers of 45,000 passengers on weekdays are expected to be doubled in the mid-term which will require a 4-5 minute headway. Opening of the trunk route section from Essey-Mouzimpré/Porte Verte to Vandoeuvre-Vélodrome and, as an extention of the existing TVR route, further on to Vandoeuvre-Nations is foreseen for 2023. The very steep section from Vélodrome to Brabois/hépital is scheduled for opening in 2026, and two years later another extension from Vandoeuvre-Nations to Vandoeuvre-Roberval and a branch to Meurthe-canal will be added to the network.

The guided trolleybus operation struggled and suffered numerous technical problems right from the beginning, and could not offer a reliable service during lenthy periods of time. The conversion of the similar system in Caen to conventional tramway operations (see: https://www.urban-transport-magazine.com/en/t-day-in-caen-new-tramway-inaugurated/ ) also accelerated the conversion plans in Nancy. After only 20 years, the concept of TVR as a means of city transport has come to an end.

See also our detailed report at: