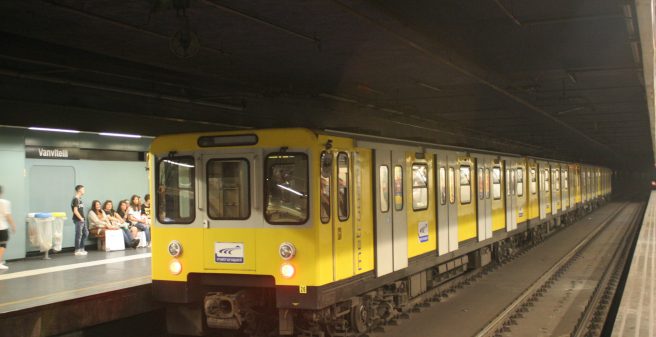 Current four-car train (consisting in two married-pairs with a car length of 17.8 m and a width of 2.85 m), built in the beginning of the 1990's by FIORE/ SOFER (carbody) and Ansaldo/ Metalmeccanica Lucana (electrical part) I UTM

The City Council of Naples has signed a contract with CAF to supply a further seven metro trains. These trains will be added to the 12 units currently being built for the Italian city. The value of the additional trains amounts to approximately 60 million EUR. The option was already considered in the framework contract which was initially signed in 2016. The owner and operator of the trains are the public transport company ANM (Azienda Napoletana Mobilità) and the Metronapoli SpA.

The trains are six-car units with a length of 17.8 m per car. The new trains will be used for the extension of the 18.2 km long metro line 1. Currently, line 1 is being extended underneath the city centre of Naples in order to form a circle line in the future. The inauguration is planned for the year 2024.

Naples is the most densely populated city in the south of Italy, with approximately 3 million inhabitants residing in the metropolitan area. Naples has a metro network with two lines: metro line 1 and a small-profile “light” metro line 6. Further to this, there are additional “metro”-type operations in and around Naples:

A map of the Naples’ transport network can be found here: