New growth in the tramway and light rail market in Germany 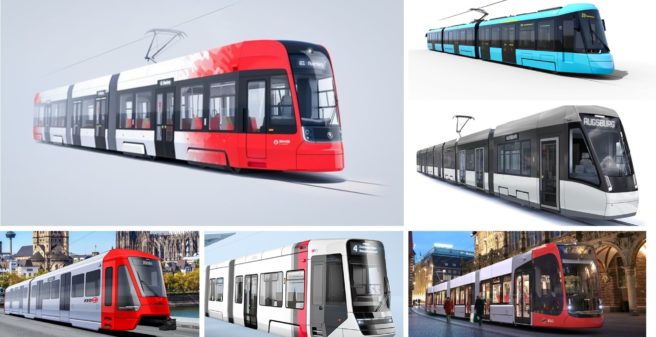 For the 20th time, the tram and light rail vehicle list has been published I Assembled by UTM

It is therefore certainly no exaggeration to speak of a new boom that last existed in the first half of the 1990s. More than 25 years ago, there was an urgent need to catch up in the renewal of vehicle fleets in both the west and the east of the then reunified Germany. In the western Länder (regions), it was mainly the large-capacity and articulated vehicles delivered in the 1950s and 1960s which had to be replaced as they had reached the end of their service life. In the eastern Länder (regions), whose vehicle development took a completely different course due to government regulations, it was conventional and „old-fashioned“ technology (e.g. two-axle vehicles) but also poor quality that required an early replacement by new tram fleets. Regardless of this, the new low-floor technology also spurred the politicians’ in order to implement low-floor trams as fast as possible. This fact accelerated the „boom“ of low-floor trams in the 1990’s.

End of service life of existing fleets in sight

Today, however, the high-floor vehicles procured by light rail operators until the 1980s, mainly in the Rhine and Ruhr region, are coming to the end of their service life which was once planned for 30 to 35 years of operation. In some cases, however, the vehicle condition is so good that a refurbishment and equipment with new technology is an alternative which is both technically and economically more viable solution than procuring new-built vehicles.

The low-floor trams built from the beginning of the 1990s were designed from the beginning for a maximum service life span of 25 to 30 years for cost reasons. Several fleets built in 1995 and onwards are now approaching their end of life. However, some operators such as KVB Cologne, SWB Bonn, MVG Munich and VAG Nuremberg already decided several years ago to refurbish also these trams including the replacement of electrical components such as converters. As mentioned above, refurbishment has quite some benefits in terms of total cost of ownership as the life span of the vehicles is expanded.

However, many companies do not consider refurbishments and prefer to procure new-built vehicles. And there are good reasons for this, too. The main motivation is the technology as well as the vehicle design aspect. The exterior and interior design of trams has evolved during the past 25 years with higher requirements in terms of passenger comfort, energy efficiency and maintainability. Bogie types developed 25 years or more have not always met expectations in daily use and require costly maintenance. There are hardly any components left for electronics from that time. Especially in this area a complete revolution has taken place.

25 years ago trams with partial low-floor areas and steps were considered state-of-the-art. Most cities, in Germany and worldwide, wish to operate 100 % low-floor trams which do not have any steps at all any more. In many cases, the decision to go for a 100 % low-floor instead a 70 % low-floor tram design is a political one. As showcased in many light rail systems on the one hand, platforms are relatively easy to built (a part from historical city centres). On the other hand, low-floor trams with no steps sometimes lead to technical compromises in the interior design and drive the unit costs of the vehicles. Also, 100 % low-floor trams can have a negative impact on the infrastructure, leading to higher maintenance cost.

To list further trends would lead to too far at this point. However it is worth taking a look back to 1993. 27 years ago, the „tram order list“ has been published for the first time in the well re-known German transport magazine „Blickpunkt Straßenbahn” (www.blickpunktstrab.de). At that time, it was a small report by one of the authors under the almost identical title “New Boom in German tram-vehicle development”. In its appendix, there was a very simple compilation of all orders. That list is practically the grandfather of today’s overview which will be published for the 20th time in 2020.

The reason for the headline to be different today is due to the simple fact that the amount of tram and light rail manufacturers has increased. In the 1990’s, the tram supply industry for German cities was an industry dominated by German manufacturers. At that time, no one would have ever thought it possible for vehicles from Poland, Spain or the Czech Republic to roll on tracks in Germany. In addition to the internationally active corporations, comparatively small niche providers have also successfully established themselves.

With the number of orders continuing to increase sharply, the compilation appeared quite regularly from 1994 onwards, mostly once a year. It was first published in the magazine „Blickpunkt Straßenbahn“ from 2002 until 2009 and then also or even exclusively in the German yearbook of the railway system until its end after 57 episodes in 2009.

From 1995 on, Rolf Hafke joined the preparation of the overview. He also launched the „Industry“ section in the magazine „Blickpunkt Straßenbahn“. It was a novelty for a pure „amateur“ magazine, proving that it can also be very professional.

From 2011 onwards, the overviews were again published. The diminishing number of order let to longer breaks between the respective reports. The sharp increase in orders since 2018 has meant that the list is now published annually again. However, only the changes compares to the previous year are published. Issue number 20 in 2020, on the other hand, is again a complete version with all order.

A reliable overview in the age of the internet

Even in the age of the internet and digitalisation, the feedback from from readers, as well as transport companies and the industry, such an overview is still modern and required. Perhaps this is the reason. Due to the diversity and amount of information, a reliable „guide“ and source of information is even more important than ever.

All 20 compilations can be found on the website of the Association of German Transport Amateurs, VDVA, (www.vdva.de) from the beginning of February on. There you will also find further information on the origin and development of these overviews. They also impressively demonstrate the impact of the liberalisation of the market within the EU and the obligation to call for tenders across  Europe. The 1996 list also includes the announcement of one of the first tenders.