New bus service in Madrid: On demand and for free! 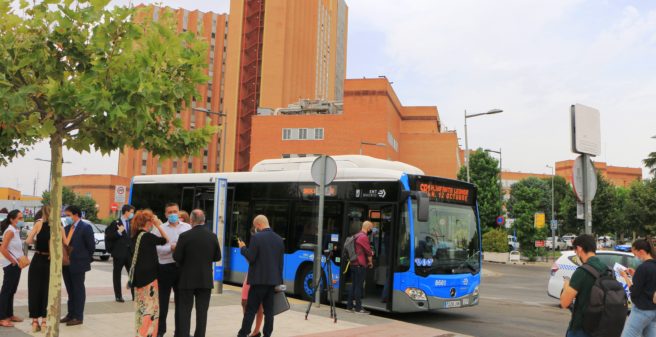 The inauguration of a completely new operation control center allowed the implementation of this concept, which is based on efficient data management: The buses in operation have two fixed termini but the intermediate stops are only served on demand by previous orders from passengers via the newly created App “Smart Bus Madrid”. Passenger requests are coordinated by one of EMT’s central IT servers, which sends instructions to the bus driver via a tablet in the driver‘s cockpit. A few of the recent Mercedes-Benz Citaro CNG are equipped accordingly – depending on the demand and the number of stops to be served on the tour. Consequently, the actual route and the time of ride/time of arrival can substantially vary. Passengers have to get onboard or to alight at one of the termini, therefore the buses will be mainly used by visitors of the hospitals and sanitary staff. The new service has been set-up as a pilot project for larger scale use on other routes in the future.

Another alternative service concept EMT had started already in February and March 2020: The introduction of two free-of-charge bus routes in Central Madrid called LINEA CERO. The first route „001“ between the two main interchange stations Moncloa and Atocha uses the newly delivery Irizar i2e electric 12-metre buses (see: https://www.urban-transport-magazine.com/en/new-irizar-e-buses-for-emt-madrid/ ) and regular operation began on 18 February 2020. It runs parallel to a number of other established bus routes on main streets like Princepa, Gran Vía, and Paseo de Prado. 3 March 2020 saw the introduction of the second free-of-charge route between Arguelles and Embajadores, which is served by full-electric minibuses of the Rampini “Wolta” model supplied to EMT in 2019 (18 of them). The new route replaces parts of the previous minibus lines M1 and M2 and passes through some very narrow streets in Madrid’s old town center.

It will be interesting to see the success of the new services, especially once the effects of the COVID-19 sanitary crises will be less prominent than today.