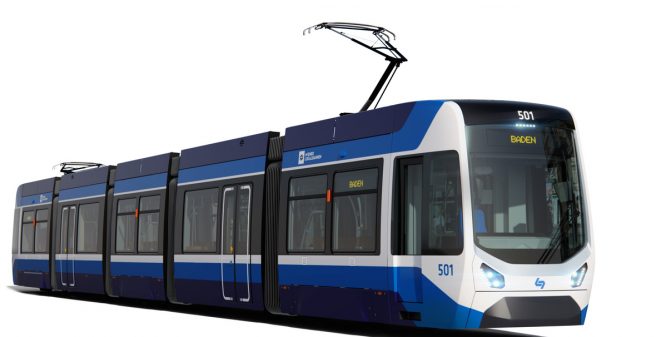 The final exterior design of the Bombardier Flexity tram for Wiener Lokalbahnen - the five-section vehicles are 100 % low-floor - delivery starts in 2021 I Source: WLB

Bombardier and Wiener Lokalbahn presented the design of the new generation of railcars on 11 July 2019. The design of the low-floor trams of the so-called “Baden Railway” (German: Badner Bahn) presents itself in a completely new outfit. Delivery of the new trains will start in 2021.

The new exterior design is characterized by strong blue colours which distinguishes the new 500 series significantly from its’ predecessor vehicles. The vehicle front is fitted with large windscreen and modern front lights.

The biggest noticeable difference for the passengers will be the 100 % low floor, the air conditioning and Wifi on the trains. in addition to the continuous low floor the air conditioning and WLAN. In December 2018, Bombardier Transportation and Wiener Lokalbahnen have signed a contract to supply 18 Flexity trams to Vienna, including the FlexCare maintenance management system over 24 years. The contract is valued at approximately 94 million EUR ($107 million US). It includes an option for an additional 16 vehicles and an additional eight years of servicing and maintenance. The vehicles are five-section 100% low-floor trams with three rigid bogies. From an architecture point of view, the trams are very similar to the Flexity Vienna trams which Bombardier is currently delivering to Vienna’s public transport operator, Wiener Linien. For the suburban Wiener Lokalbahn, the front and the rear sections were shortened by a double door and one door from the each central section was also removed.

The local railway Vienna – Baden and its’ rolling stock

The 30.4 km long “Badner Bahn” was put into operation in 1907 and runs between Vienna Opera and Baden Josefsplatz. Every day the line is used by about 30,000 passengers. Between the stops Baden Josefsplatz and Baden Leesdorf, as well as between Vienna Schedifkaplatz and Vienna Opera the line is running at street level – on the remaining sections it is operated as a “mainline” railway with right-of-way infrastructure.

WLB’s current fleet consists of 26 eight-axle railcars of the series 100 (built in 1979, ’83, ’87, ’89, 1991 – 93 by SGP), of which two trains have already been retired, and 14 six-axle low-floor railcars of the 400 series (built in 2000, ’06, 2009-2010, built by the manufacturer consortium Bombardier, Adtranz, Elin, Siemens). Both series are even operated double traction – meaning that high- and low-floor cars are coupled together. The series 100 is based on the so-called “Mannheim”-type Düwag tram design of the 1970’s while the vehicle architecture is very close to the GT8S design of Düsseldorf’s Rheinbahn. The Bombardier built 400 series is based on the Vienna light rail series T/T1 which is running on the line U6.