New hope for the interurban trolleybus system in Sanremo 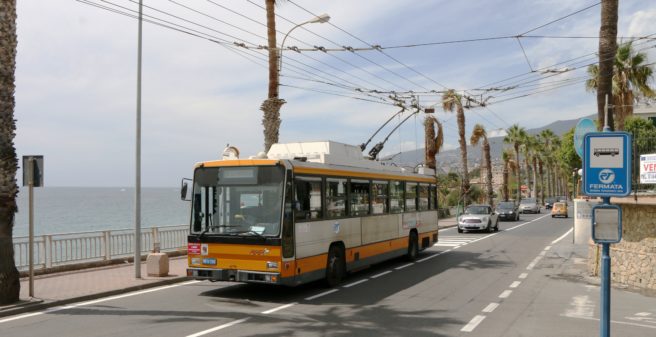 The Municipality of Sanremo has submitted to the Italian Ministry of Infrastructure and Transport (MIT) the application for the funding of the extensive refurbishment and upgrading programme for the interurban trolleybus system along the so-called “Riviera dei Fiori”.

For many years already, the system (opened in 1942) has been in desperate need for a renewal of its infrastructure and the vehicles using it. Daily service is limited to a maximum turnout of only two vehicles on the short inner-urban line between Villa Helios and La Brezza while the 18 km long interurban service between Sanremo westbound via Ospedaletti and Bordighera to Ventimiglia on the French border is only sporadically served by trolleybuses. The 12 km eastbound route to Taggia has been out of service for more than 20 years, although parts of the overhead lines were reconstructed years ago. The fleet of operational trolleybuses is also very limited, only five Breda Menarini vehicles built in 1991 are operational, even the only two low-floor Solaris Trollino 12 of 2008 are in urgent need for repairs.

On the one hand, shutting down of the whole network had been discussed several times in the past, while on the other hand detailed plans were contemplated and officially presented 15 years ago to built a new, parallel route with its own right-of-way on an old railway trackbed using stylish new trolleybuses. Neither decision was ever finalized.

The current initiative to renew the entire system encompasses the purchase of 23 new battery-trolleybuses using „In-motion Charging“ (IMC). This technology enables the continuation of service „off-wire“, i.e. where no overhead lines are installed, by means of powerful traction batteries, which are recharged along the way while running under wires on other parts of the route. 10 of these vehicles will be articulated. The power supply system will be upgraded to 750 V (today 600 V) and the substations will also be totally renewed. Parts of the catenary need to be refurbished or replaced as well, and a new depot area is planned, too. The project design also includes additional bus lanes and/or own right-of-way sections in order to increase the speed and reduce travel time on the routes, which are heavily affected by congestion, especially during the summer season. Interchange points to other routes and the railway will be built at Ventimiglia, Vallecrosia, Bordighera, Sanremo and Taggia.

The new, 30 km long route from Ventimiglia via Sanremo to Taggia runs almost completely along the beautiful coast line of the Riviera dei Fiori. It will be supplemented by other current bus routes where the new battery-trolleybuses can use the existing overhead on parts of the route shared with the main line. Total investment cost is expected to amount to approximately 50 million EUR.

As a starting point, the city government also decided to refurbish some of the trolleybuses which are currently out of service, including the 1957-built no. 29, which had been used as a historic vehicle for special occasions in the past.

Let’s hope for that all these plan will finally receive the necessary funding so that the electric „filobus“ – as it is called in Italian – can once again show its potential and benefits as a modern and environmentally-friendly way of public transportation.