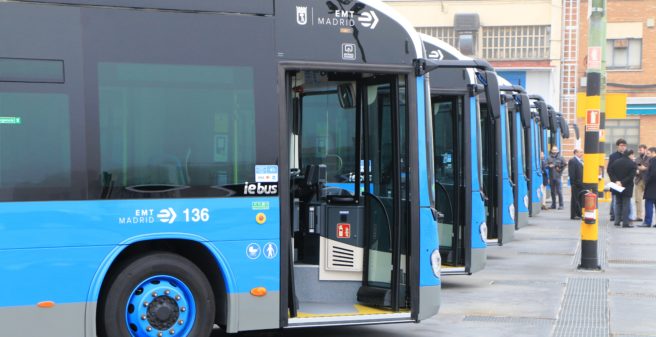 On 11 February 2020, the Empresa Municipal de Transport (EMT) Madrid and the manufacturer Irizar officially presented its new e-buses: 20 Irizar full-electric battery-powered “ie bus” started revenue service on several Madrid city routes. EMT as one of Europe’s largest municipal bus operators is using various different types of (partially) electric buses for several years already, and two years ago it purchased a first series of 15 all-electric battery vehicles of 12 meter standard length from Irizar, branded “2ie” at that time. The new e-buses have litium-ion batteries with a capacity of 350 kWh, the nominal power of the e-motor is 180 kW. The vehicles offer a passenger capacity of 75, thereof 28 seated. The new buses are numbered 117 to 136, the first series no. 102 to 116.

All new battery buses use overnight charging at the depot(s) – a concept that the EMT will also apply for future procurements. The large-scale installation of direct current distribution and charging infrastructure for opportunity charging in Madrid’s urban landscape is not considered as a viable option in economic terms.

EMT has various hybrid bus models in its fleet for several years already, as well as currently 27 battery-electric minibuses, and five midibuses for inductive charging at either terminus of line 76 in the southern suburbs of Madrid.

Another 15 battery buses from different manufacturer are expected shortly, and bids for a further 50 vehicles are currently being launched. By 2023, EMT’s e-bus fleet is to grow by 50 units yearly, and after 2023 even 100 new e-buses per year. In addition, one of the five large depots will be fully equipped for e-operation.