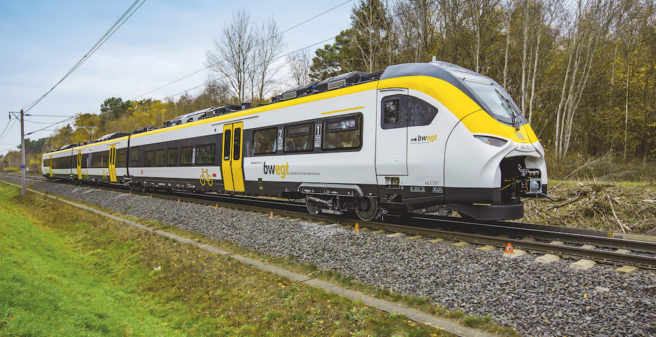 Siemens has achieved the vehicle homologation for its new Mireo regional train. 24 of such trains will operate on the Rhine Valley line in Baden-Württemberg. So far, Siemens has sold 176 Mireo trains in Germany I © Siemens Mobility

In February 2017, the Ministry for Transport in the state of Baden-Württemberg ordered 24 Mireo trains and 15 Desiro HC double-decker trains to be operated by DB Regio. This marked the first order for the new Mireo regional multiple-unit trains developed by Siemens Mobility. The Mireo has received initial approval from the German Railway Authority in time for the timetable change in June 2020. Plans call for gradually incorporating the Mireo trains in regional service (RB) on the Offenburg – Freiburg – Basel/Neuenburg (Rhine) route beginning with the timetable change in June 2020.

The new regional train platform from Siemens has sold well since the launch of the new vehicle concept at InnoTrans 2016. A total of 176 trains have been sold so far to the following regional networks and operators:

In contrast to conventional trainsets, the Mireo is characterized by longer car bodies, which means that the number of bogies and articulations can be reduced. Above all, this saves weight and costs. Another advantage is the use of inboard bearing bogies, which are also significantly lighter than conventional bogies. The Mireo is also available as a battery powered train “Mireo Plus B” for non-electrified or only partially electrified lines. 20 battery trains have already been sold to the Baden-Württemberg public transport authority as part of a full-life service contract, as we reported here: https://www.urban-transport-magazine.com/en/siemens-mobility-receives-first-order-for-battery-powered-trains/

In addition, Siemens is developing a Mireo fuel cell variant with together with the Canadian company Ballard Power Systems. This will enable the train to run on long non-electrified railway lines.

Start of operation in June

“We are pleased that from mid-June, our passengers will be able to get to their destination in new trains much faster than before in local transport. We connect North Baden from Karlsruhe to Switzerland with an attractive transport concept,” says David Weltzien, Chairman DB Regio Baden-Württemberg.

“The new Mireo train, which combines economic viability with sustainability over the entire life cycle of the train, is a successful project for Siemens Mobility. The train received its initial approval from the authorities on schedule and Siemens Mobility has already been awarded a total of seven Mireo fleets and six Desiro HC fleets since its launch. We are delighted that our Mireo and Desiro HC trains will improve passenger experience and the capacity of the Rhine Valley Railway.” says Sabrina Soussan, CEO of Siemens Mobility.

Along with the 24 Mireo trains, 15 new, comfortable and energy-saving Desiro HC (double-decker) trains from Siemens Mobility will also operate as a regional express on the Karlsruhe – Offenburg – Freiburg – Basel route. These additions will completely restructure the rail offerings in the Rhine Valley: there will then be a clear distinction between express service between the region’s major cities and a regional or commuter system similar to the S-Bahn, stopping at all stations.

The Mireo has been designed as a scalable articulated train. All technical components are installed either beneath the floor or on the roof, making every centimeter of the interior space available for the passengers’ comfort. The three-car trains have 200 seats and a generous number of multipurpose spaces. The double-decker Desiro HC is particularly characterized by its already proven reliability and very high availability and is very popular with passengers because of its large capacity and comfort. Siemens Mobility has designed the Mireo and Desiro HC trains to be especially ecofriendly. The trains weigh approximately 25 percent less thanks to their lightweight construction. The design ensures optimized aerodynamics and energy efficiency for each of the components. Both the Mireo and Desiro HC make optimal use of the energy used and, thanks to modern design principles, achieve a reduction in energy consumption of up to 25 percent compared to vehicles on the market with the same capacity and are also designed to be maintenance-friendly. Both the Mireo and Desiro HC trains were intensively tested at the Siemens Test and Validation Center in Wegberg-Wildenrath before being commissioned. When the trains are in passenger service, they will collect all data relevant for diagnostics, maintenance and train control and transmit it to the trackside control center. This predictive monitoring will enable the operator to plan maintenance in advance and prevent breakdowns.