New Stations for S-Bahn and Metro in Hamburg 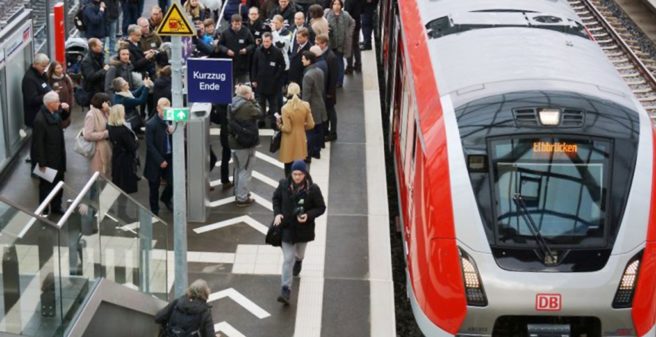 Still largely in “No man’s land”, but soon in the vicinity of an attractive new housing area, a new central interchange between the suburban trains “S-Bahn”, the metro and the buses has been built at Hamburg’s well-known Elbbrücken – the bridges over the river Elbe.

Already since 6 December 2018 Hamburger Hochbahn AG’s metro line U4 terminates here. Line 4 had been extended by one stop from the former Hafencity-Universität termnius to the new Elbbrücken terminus, built on surface.

Parallel to this new metro station, a new interchange to S-Bahn lines S3 and S31 had been under construction. It is connected to the metro by a 70-metre-long pedestrian bridge. The architecture of the two station halls is remarkable, both were designed by “gmp – Architects of Gerkan, Marg and Partner” as a steel-glass construction with external structure.

The new S-Bahn stop and at the same time the interchange was officially opened on 15 December 2019.

A new metro station was also opened a few days earlier, on 9 December, in the network of the Hamburger Hochbahn – at Oldenfelde as part of the U1 line. Construction of this new station was pending for a long time, as the housing development in the nearby area clearly shows potential for considerable passenger demand.For them, the new station allows for faster and more attractive connection to the city centre – and definitely much better than the previous bus connections. 4500 inhabitants are already today within walking distance from the new station, and more are yet to come.

These two inaugurantions are a just a minor part of the extensive expansion plans in Hamburg’s urban and suburban rail network: Main intention is increase the modal split of public transport in Hamburg to 30% in the mid-term, which relates to a 50% increase in passengers demand compared with the current situation, as it has been to communicated to the press by the city’s mayor Peter Tschentscher.

A map is available at: http://www.urbanrail.net/eu/de/hh/hamburg.htm

I recall seeing VR representation of the New S-Bahn Station Elbbrücken at UITP 2017 – so I recognized the actual photos instantly!