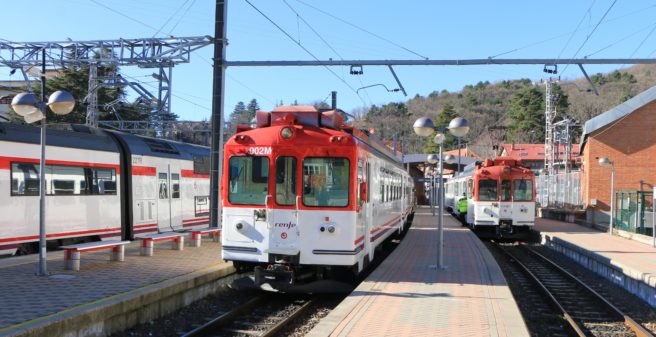 Spain’s state-owned RENFE has awarded CAF the contract for the delivery of 37 metre-gauge train sets for the renewal of the aging fleet of several regional and suburban railway lines in the country.

31 of the trains are foreseen for the extensive narrow-gauge network in Galicia, Asturias, Cantabria, Castilla y León and the Basque Country in Northern Spain, which had been operated by the also state-owned FEVE until 2012. 26 of these (two- and three-module) train sets will be EMUs, while another 5 more will be hybrid trains for additional use on some non-electrified sections. All trains are prepared to be re-equipped with additional battery or fuel cell units at a later stage which would convert them into hybrid vehciles. All trains replace older train sets from the 1980s.

6 more new, two-module train sets with different equipment will be used on the only metre-gauge line of Madrid’s suburban network “Cercanías” between Cercedilla and Cotos. This line C9 includes up to 7% gradients on its route in the mountains north of the capital. The new train sets will replace between 38 and 44 years old trains with coupled trailers, which will bring a considerable increase in comfort on the line. Currently, the line is out of service since mid-March 2020, and there is no information available if and when the service may resume.

Contract value of all 37 trains is EUR 287 million and includes a 15-year maintenance contract for 12 of the units. An option for the supply of 7 additional trains has also been included.