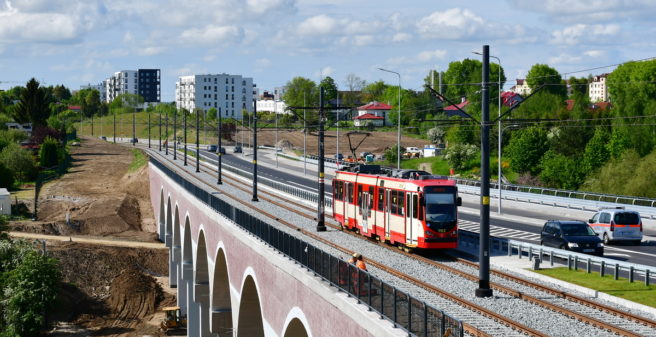 The 2.6 km long new route to "Lawendowe Wzgórze" is crosses a quite hilly region and is running on a new viaduct I © Krystian Jacobson

Gdańsk’s public transport operator GAiT and transport authority ZTM inaugurated a new tram extension on 30 June 2020 as well as the fully refurbished tram line to Stogi Plaża which reopened that same day. The 2.6 km new line is operated by line 12 and connects Migowo to Lawendowe Wzgórze (Lavender hill) in the southwest of the city and is part of a new “ring tramway” project. The project includes six stops and a combined tram and bus interchange to lines 115, 120, 156 and 174 at Ujeścisko with a park-and-ride site with space for 167 cars and 22 bikes.

On 30 June at 4h35 in the morning, the first tram left the new terminus at “Lawendowe Wzgórze” and ran along the Al. Adamowicz which has been named in remembrance of Gdańsk’s mayor Paweł Bogdan Adamowicz who has been assassinated in January 2019. The new tram line connects several large districts such as Jasień, Ujeścisko-Łostowice and Piecki-Migowo.

The project of Al. Paweł Adamowicz (technically called Nowa Bulońska Północna) is part of the Strategic Development Program of the Southern district for the years 2014-2020, developed by the city authorities. The task is carried out as part of the Gdańsk Public Transport Program – GPKM stage IVa. The contractor is a consortium of companies led by NDI S.A. from Sopot. The construction cost was PLN 243 million (ca. 60.8 million Euros). The investment is co-financed from the Cohesion Fund under the Operational Program Infrastructure and Environment for the years 2014 – 2020 of the European union with an amount of approximately PLN 58.5 million (ca. 14.6 million Euros).

The coastal line of the three cities Gdańsk, Sopot and Gdynia is already very populated. For this reason, Gdańsk’s south-western hinterland districts are growing fast. In the past decade or so, thousands of new-built apartments with over 100,000 residents were built here. This lead to the extension of the tram to Chełm (2.6 km) in 2007, then in 2012 from Chełm to Łostowice (3 km) and the line from Siedlce with two branches to Brętowo and Migowo. The now opened sections runs from Migowo via Ujeścisko to “Lawendowe Wzgórze”. A turning loop in Ujeścisko has been installed which is run by all trams. The terminus at Lawendowe Wzgórze has not been fitted with a turning loop. This is why currently, only bi-directional trams are operated on the line.

The newly commissioned new tram route is the first stage of the future GPW ring route, i.e. Gdańsk Południe – Wrzeszcz (Gdańsk South – Wrzeszcz). ZTM Gdańsk is currently in the process of selecting a contractor for the Nowa Warszawska trams extension. An earlier tender process had to be repeated as there was only one bidding company. The section will connect the “Ujeścisko” loop to the Vaclava Havla street tram line towards Łostowice Świętokrzyska. The new ring tram line will then allow all residents from Gdańsk’s south-western districts to commute more easily to the Wrzeszcz district where many jobs, offices, universities, shopping centres are located. A new bus line 129 will be launched to connect line 12 to Wrzeszcz. Furthermore, additional tram extensions are planned. We will report about these plans in the future.

The Gdańsk hinterland is quite hilly compared to the coast. The so-called end moraines are the scree of the glaciers of the last ice age, which ultimately “remained”. This results in numerous slopes and valleys, which is why a new bridge structure was built in Aleja Adamowicz. The entire railway line runs on its own railway body. Some Vignol rails, some grooved rails were laid on cross sleepers.

Trams are back to the Stogi beach tram line

On Tuesday, 30 June at 4h41, tram operations started on the fully refurbished infrastructure to the Stogi beach on tram lines 8 and 9. The tram line is Gdańsk’s closest tram line to the Baltic coast. From the terminus loop its only a few meters to the sea. Tram lines 8 and 9 will run every 10 minutes during peak hours. This frequency will also be maintained beyond the “peaks” on route 8. On the other hand, trams on route 9 will travel every 20 minutes outside the rush hour.

For the event, the historic 273 tram car was also circulating. This was not by accident. Exactly on 1 July 1927, a new 5.7 km route was commissioned on the section from the Żuławska Gate through Przeróbka to Stogi. With five other trams, the so-called “ring tram type” was produced by the Gdańsk Wagon Factory (Danziger Waggon Fabrik, later the Northern Shipyard). The trams served in Gdańsk until the 1950’s. Tram car 273 was brought to Kraków in the 1980’s and only restored until 2016. Its historical appearance, including cream-blue livery, characteristic of the interwar period between 1920 and 1939 when the then called “Free city of Danzig” was a semi-autonomous state. The historic tram is running regularly on the city’s historical tram line during the summer season.

The 15 newly delivered Pesa Jazz Duo (Type 128NG) low-floor trams were also operated on the opening day. These are five-car bidirectional vehicles. The 15th car was painted in the colors green / beige for the 75th anniversary of the Lechia Gdańsk football club. It is expected that the use of the classic Konstal 105Na four-axle will soon come to an end. For a total of 52 ex Dortmund and ex Kasseler N8C, a modernization program was recently started, in which motors and electrics are replaced. The tram fleet currently consists of the following vehicles (status June 2020):