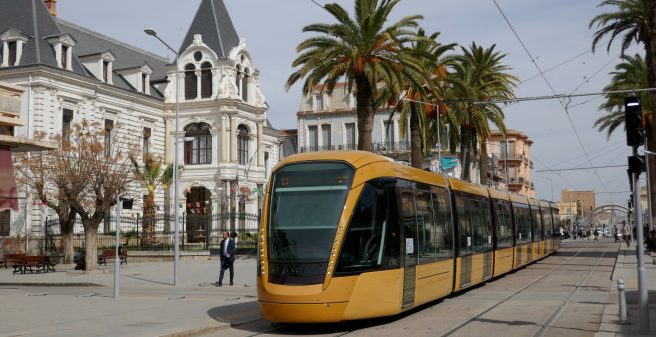 The remarkable expansion of tram networks in Algeria continues. Since 2011, a total of six completely new built tram systems with modern low-floor vehicles have started regular operations with a seventh system currently under construction.

Among the latest developments is the opening of a 6.9 km extension of the only line in the port city of Constantine from Zouaghi Simane to Ali Mendjeli on 3 June 2019 . Another 3.4 km extension is under construction. At the same time, Alstom delivered 24 more Citadis trams from its Algerian assembly plant in Annaba. Constantine’s first new tram started its’ operation with 20 such vehicles since 2013 and in the same year the tram in Oran with 30 Citadis was launched. Two years earlier, in 2011, the first of the 41 low-floor trams in the capital of Algiers had already commenced with its services and after several extensions, this line is now 23 km long. Another 9.5 km extension in the suburbs from d’El Harrach to the airport is to be opened in 2020 at an investment cost of 9 billion Dinars (67.5 million Euros).

Also in 2011, the nation’s first metro line was opened in the capital. While Alstom has been a system supplier for trams ever since, CAF supplied the cars for the Metro and Siemens was responsible for the signaling and safety technology, and this also for the two extensions of the Metro Algiers.

For just over a year now, Algiers has also been operating the important downtown extension of the metro to Place des Martyrs with an envisaged extension further to the North as well as the construction of two additional metro lines. For one of them, the VAL system with rubber-tyred technology is considered as an option because of steep gradients along the route, but no decision has been reached yet.

After the strong drop in oil prices had a negative impact on the economic power of the country for quite some time, construction works for new tram systems either faced a considerable slow down or – at least in some cities – it came to a complete stop. Nevertheless and with some delay, three more systems were finally able to start passenger operations in 2017/18.

The first new system to open was Sidi Bel Abbès which has a population of some 200,000 inhabitants. The new tram started revenue service on 25 July 2017 on the new 13.8 km line. The route comprises a circular line in the old town center as well as two branch lines. Starting at the outer end in Les Cascades the tramways pass the entire downtown circle and continue to the other branch to Cité 20 Aout and viceversa. The investment costed 28.2 billion Dinars (ca. 211.6 million Euros).

20 March 2018 saw the opening of the first 9.8 km long section of the tramway in the city of Ouargla with 130,000 inhabitants which is located in the desert area of the country. The investment for the first line was
30 billion Dinars (228 million Euros). Another 2.8 km route will follow suit in 2019.

Less than two months later, on 8 May 2018, the first 15 km long line from Université El Bez to the Center de Maintenance was opened in Sétif (290,000 inhabitants). A second line to an area south of the city is under construction. Construction work is also under way in the city of Mostaganem (150,000 inhabitants) after an interruption of several years. If everything goes according to plan, at least the first part of the 14.2 km long, initial line with 24 stations will start it operations before the end of the year 2019. In various other cities plans for new systems could be revived and construction could begin once the central government provides sufficient funding. Detailed planning permits do exist for the cities of Annaba, Skikda, Batna, Béjaïa, Tébessa et Tlemcen, Djelfa, Blida and Béchar.

The three newly opened tramway systems all use the seven-section, 42 meter-long Citadis 402 model, albeit each with a distinctive design. In Sidi Bel Abbès there are 30 of these vehicles, in Ouargla 23 and in Sétif 26. The same model will also be used in Mostaganem, where the first car was delivered on 20 April 2019.

Algeria now is the country with the largest number of urban rail transport systems on the entire African continent.

An uprising potential in the African North - part two - rawvisus

[…] notice one thing in the north of Algeria, which doesn’t seem to fit in the picture: new, modern trams which systems were built in 2011 – maybe that’s where Algeria’s revolution […]