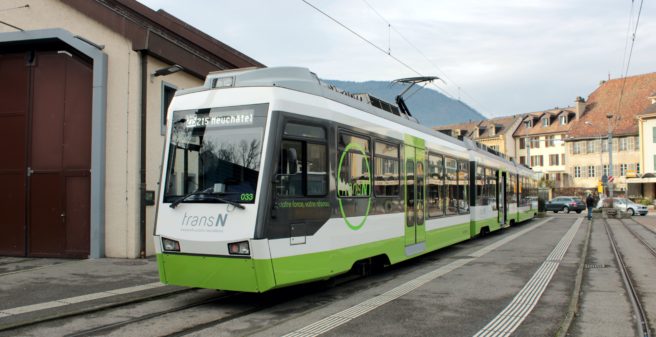 Since 1976, there is just one tram line left in the Swiss city of Neuchatel, numbered 215 and only 8.9 km long. This is the interurban route to Boudry, which starts in the centre of Neuchatel directly on the lake shore at the central Place Pury, where transfers to various trolleybus and bus lines are offered.

The local operator “Transports Publics Neuchatelois” (TransN) is in need to replace the 38-year old train sets (motor cars 501-506, motorized trailers 551-554), since they have reached the end of their economic useful life. In addition, they are no longer in line with the current requirements for barrier-free access to any kind of public transport.

TransN took the opportunity to purchase five three-module, partially low-floor train sets in a second-hand transaction from Appenzeller Bahn (AB), which are only 11 years old. They were disposed of due to a change in the operation scheme of the Trogenerbahn line. This line is now through-operated jointly with the other meter-gauge route towards Appenzell. After some lengthy negotiations, the purchase was finalized and the first train sets started revenue service in Neuchatel in November 2019. All older train sets will be decommissioned and are expected to be scrapped in the near future, just Be 4/4 504 might be preserved by the ANAT (Association Neuchâteloise des Amis du Tramway).