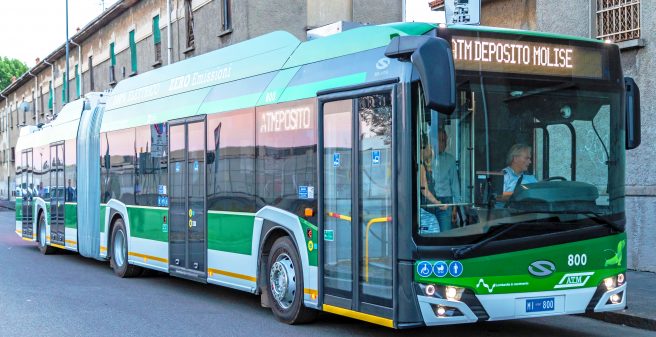 As part of the long-term plan to convert all public transport to locally emission-free operations by 2030, ATM Milano had announced plans to modernize the elderly trolleybus fleet as well as to extend the use of battery-electric buses.

ATM had tendered the purchase of up to 250 full-electric buses several months ago, and Solaris Bus&Coach was declared the winner now. As a starting point, a first firm order of 40 12-meter ebuses was signed for delivery in 2020. These “Urbino 12 electric” have an electric motor power pf 2x110kW while the battery package has a combined capacity of 240kWh. There will be an opportunity for charging stations with inverted pantographs on certain bus stops as well as overnight charging stations at the depot. ATM Milano had already taken delivery of 25 similar vehicles in the last two years, which are operating on various routes. 125 EURO 6 diesel buses had been purchased from Solaris before.

Solaris also started with the delivery of the first new articulated “Trollino 18” trolleybus (with Kiepe Electric equipment) of an order of 80 such vehicles. Theywill gradually replace older high-floor articulated trolleybuses built between 1990-93, which are currently used on route 90/91/92 as well as the remaining two-axle Socimi trolleybusses on route 93. After more than 35 years in service, the Socimis definitely face the end of their useful life cycle. Some 20 of them are still in operating condition. Today’s trolleybus fleet is not sufficient to cover all services anymore, and subsequently bus substitution is common on route 92 and 93. This will end with the delivery of the new Solaris, and passenger capacity offered to the public will also increase as the new fleet will be entirely composed by articulated trolleybuses. Currently, the operational fleet comprises some 120 vehicles of 6 different models. The new Trollino 18 have a traction motor power of 2×160 kW. In addition, they are equipped with 45 kWh batteries which allow for up to 15 km driving off the overhead network.