New Zealand: 56 modern trolleybuses out of service for 2 years now 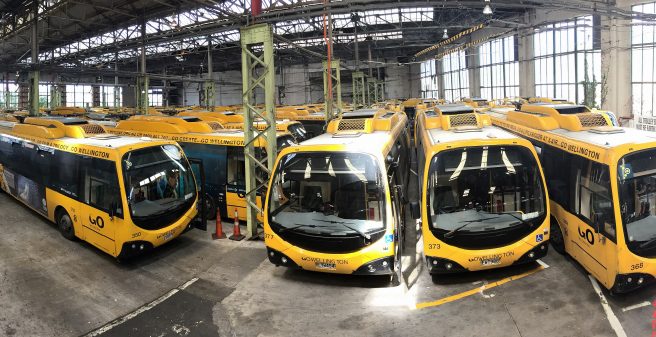 Exactly two years ago, 31 October 2017 saw the end of 68 years of trolleybus services on Wellington‘s eight-line network. This is remarkable as the fleet had been entirely replaced with new low-floor trolleybuses between 2007 and 2009 and the overhead network is still in good shape.

The decision to shut down the system once and for all caused much debate among experts in many different circles around the world – especially since New Zealand’s politicians frequently refer to their own country as green and eco-friendly. Even more suprising is that no sustainable and technically viable alternative concept was presented. Instead, second-hand diesel buses took over parts of the services, which were previously operated with emission-free electric trolleybuses. A conversion project was announced with much publicity, based on the idea to covert the modern trolleybuses into hybrid buses using the unproven „Whrightspeed“ gas-turbine technology. However, after several months of trials this approach failed completely and the bus returned to its former depot as nothing more than body shell. The delivery of 32 battery-electric buses is foreseen by 2021 – thus replacing more or less half of the former trolleybuses fleet with other electric vehicles. The first 10 buses arrived in Wellington in 2018 and are in service ever since. These are 10.4 m long double deckers. the substation infrastructure.

One of the reasons to abandon the trolleybus operations was the need to re-route Wellington’s city buses lines and the corresponding investments, although most of the modifications would have allowed further use of trolleybuses simply by implementing the In-Motion-Charging-Technologie (IMC): The vehicles would have run in battery mode on streets without overhead networks and charge their batteries while running under the existing overhead on other stretches of the rote. But it seems that nobody was really interested in these technologic advances, successfully in operation at numerous trolleybus systems abroad. Instead, the overhead was quickly dismantled. The cost for scrapping the overhead network would have covered already the bigger part of the investments needed to renew some of the substation infrastructure.

The entire modern fleet out of service

20 months after closure 55 of the 57 three-axle low-floor „Designline“ trolleybuses are still parked out of use in the former Kilbernie workshops. Some of them saw only 8 years of active service. In addition, trolleybus 362 returned to Kilbernie after the failure of the „Whrightspeed“ project. Only one other trolleybus, no. 361, was converted into a battery electric bus by using Chinese equipment, but no further conversions have been announced so far.

Three two-axle prototypes of similar external design niumbered 301-303 have been handed over to an enthusiasts‘ group, which focuses on the preservation of historical vehicles as a national heritage.

For more information see issue no. 4/2017 of the German magazine “stadtverkehr”: https://www.stadtverkehr.de/stadtverkehr/2675-trolleybus-ende-alles-anders-in-wellington