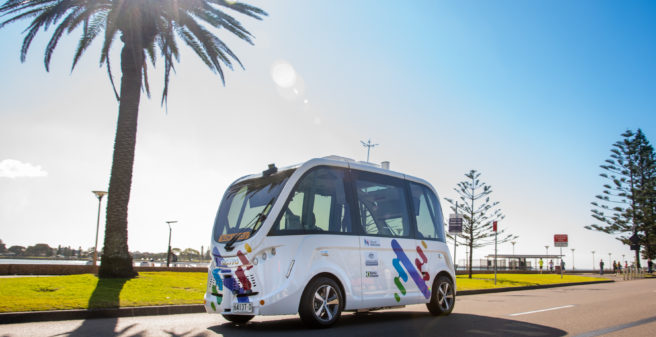 Keolis Downer, the Australian subsidiary of the French transport group Keolis, is launching the continent’s first autonomous minibus in Newcastle. The shuttle trial is being operated in the streets of Newcastle by Keolis Downer, on behalf of City of Newcastle. The bus will be operating on Wharf Road between Watt Street and Nobbys Beach. The use of the small autonomous minibus is free of charge.

David Franks, chief executive of Keolis Downer, says: “It’s amazing to see the little bus driving in the middle of the rest of the traffic. We are delighted to be a partner of the City of Newcastle and to help gain more insight into this new technology. We are also pleased when the passengers not only take the Navya with them, but also let us know about their riding experience.”

Last November, an autonomous minibus was used on test during a festival in Newcastle. At that time, Keolis said, more than 100 passengers partcipated in a survey and 90% of them gave positive feedback.

An “operator” (here called “Chaparone”) still has to be on board. And we also know this from Germany: the maximum speed of autonomous buses on public roads is still limited to 20 km/h also in Australia. Prior to the authorities’ approval to use the minibus on public streets in Newcastle Navya passed all safety tests without any significant incident.

Keolis emphasizes that he has long experience with autonomous buses. The first such minibus had already been used in Lyon in 2016 – now it is part of the normal regular service offering. “We are proud to be involved in the fast development of this technology.”