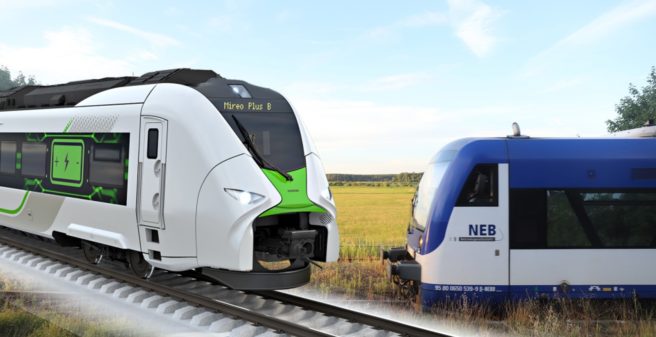 NEB will continue to operate the East Brandenburg network until December 2036, with battery-electric vehicles being used in the interconnected area for the first time. In addition, the service will be expanded compared to today.

For the first time, locally emission-free battery multiple units will be used in the Berlin Brandenburg metropolitan region. So far, such vehicles have been ordered for Schleswig-Holstein (Stadler Flirt Akku), Baden-Württemberg (Siemens Mireo Plus B) and Saxony (Alstom Coradia Continental BEMU). Tenders are currently being prepared in Rhineland-Palatinate, Saarland, North Rhine-Westphalia and Mecklenburg-Western Pomerania.

The regional transport authority, Verkehrsverbund Berlin-Brandenburg (VBB), has awarded the contract in the Netz Ostbrandenburg competition to NEB Betriebsgesellschaft mbH (NEB). As before, the East Brandenburg network comprises the lines RB12, RB25, RB26, RB35, RB36, RB54, RB60, RB61, RB62 and RB63. The Europe-wide award procedure was carried out on behalf of the federal states of Berlin and Brandenburg. In the future East Brandenburg network, the rail services for passengers will be significantly improved by new vehicles, increased frequency and new service standards. In the future, electric vehicles with battery storage will be used on all technically suitable lines. The start of operations is planned for the end of 2024.

With the award of the contract to the NEB for the East Brandenburg network, the federal states of Brandenburg and Berlin, as the responsible authorities for local rail passenger transport, are implementing an improved connection of the region in the area on the regional rail lines in six districts and one large city in the north and east of Brandenburg.

For battery operation on the RB12, RB25, RB35, RB36, RB54, RB60, RB61, RB62 and RB63 lines, Siemens Mobility is procuring a total of 26 two-car Mireo Plus B battery multiple units, which are expected to be identical in construction to the vehicles ordered in 2020 for the Ortenau network in Baden-Württemberg. According to the manufacturer, the two-part “BEMU’s” achieve a range of a good 100 km and are equipped with LTO traction batteries. The Mireo’s replace RegioShuttles with 70 seats on most lines.

Compared to other tenders, it is reported that no additional charging infrastructure is planned for the East Brandenburg network. Except for the 81 km (162 km return) long RB26 from Berlin Ostkreuz to Kostrzyn (Poland), all non-electrified lines are significantly shorter than 100 km, so that stable electric operation can take place. The construction of a 15 kV charging facility at the Polish terminus of the RB26 line in Kostrzyn would probably have been complex and lengthy. As is usual with battery multiple units, recharging takes place via the existing overhead line when the train is stationary and during travel. The longest non-electrified section has a length of 80 km on line RB36.

With the East Brandenburg network, the VBB is aggressively continuing the mandate of the federal states to strengthen rail in the region from 2024 and has reached another milestone with the award of the contract to NEB. Numerous extensions to the existing services are planned. In particular, the regional train lines RB25 to Werneuchen and RB26 to Müncheberg will offer an attractive half-hourly service from Monday to Friday and the RB35 line will be extended by one stop to Bad Saarow Süd. Weekend and late-night services will also be noticeably improved by new offers.

The RB60 Eberswalde Hbf – Frankfurt (Oder) line is also to be increased to an hourly frequency in the Wriezen – Frankfurt (Oder) section in connection with the further expansion of the infrastructure, including in Seelow (Mark). This will give the East Brandenburg region a much broader and, above all, a more flexible rail service. The direct connection of the RB26 to the neighbouring country of Poland will also be upgraded with additional journeys in the morning and in the evening. The entire offer of the East Brandenburg network will increase by almost 30% compared to the 2020 timetable.

Particularly noteworthy in this network is the focus on alternative drive systems. The East Brandenburg network will mainly use newly procured modern vehicles.

With the exception of the RB26, vehicles with battery storage will be used in future on all lines put out to tender, which can also run on the non-electrified line sections. The batteries will be recharged on the sections of the line with overhead lines. There are no restrictions in the capacities and timetable times. Diesel multiple units will continue to be used on the RB26 in the coming contract period. The federally owned infrastructure, with long sections of non-electrified track on this line, does not currently allow battery trains to be recharged. Hydrogen-powered vehicles were also possible during the tendering process. However, these were not offered by any bidder.
The vehicle reserve will be significantly increased compared to previous awards. A total of 42 vehicles will be on the road in the network, 26 of which are battery-electric vehicles of the type Siemens Mireo Plus B. Furthermore, 16 diesel vehicles of the type PESA Link will be used, eleven used vehicles and five new vehicles.

The use of Siemens Mireo Plus B vehicles means that more seating capacity is available to passengers on the lines concerned than was required in the invitation to tender. On the RB36 and RB60 lines, passengers will be offered 128 seats instead of the required 70. Likewise, the capacities on the lines RB12, RB25, RB35, RB54, RB61, RB62 and RB63 will be increased with 128 seats in single traction and 256 seats in double traction. The RegioShuttle diesel railcars previously used on some of the lines will thus be replaced.

The seating capacity of the PESA Link vehicles is 120 seats for used vehicles and 122 seats for new vehicles. The VBB quality standards already set in the Elbe-Spree network also apply to the East Brandenburg network, for example free WLAN, plus a dynamic information portal that can be used for mobile devices, a service or help call and special parking spaces for bicycles.

With the newly optimised East Brandenburg network, local rail passenger transport (SPNV) is thus to be secured in the long term and thus given the highest level of planning security. By favouring battery and hydrogen drives, the current activities around climate change and their goals are taken into account. The use of alternative vehicle drives contributes significantly to the reduction of regional emissions. Around 3.8 million litres of diesel are consumed less each year. This results in an annual saving of around 10,000 tonnes of local CO2 emissions and a significant reduction in particulate matter emissions. The contract has a term of twelve years and begins in December 2024. The total annual volume amounts to 6.7 million train kilometres.

Guido Beermann, Minister of Transport of the State of Brandenburg: “Above all, the north and east of Brandenburg will benefit from the denser and more flexible services as well as better capacities for the connections in demand to the neighbouring Polish province of Lubuskie. In this way, we are strengthening the region and, at the same time, climate-friendly local rail passenger transport with the innovative drives. In addition, we can now increase the frequency on the RB25 to Werneuchen, the RB26 to Müncheberg and on the RB60 between Wriezen and Frankfurt (Oder), as envisaged in the regional transport plan. In this way, we are creating important conditions for the sustainable development of these settlement axes in Berlin’s urban hinterland.

Regine Günther, Senator for the Environment, Transport and Climate Protection of the State of Berlin: “Battery-electric trains are finally being used in the new East Brandenburg network. This is an important contribution to climate protection and the modernisation of the fleet. But the trains are not only climate-friendly, they also offer more comfort and flexibility with additional seats and denser intervals. Especially for commuters, we are offering a more attractive service.

Susanne Henckel, Managing Director of the Berlin-Brandenburg Transport Association (VBB): “There is no alternative: rail must be further strengthened. The recent award of the East Brandenburg network to NEB ensures continuity, planning security and more quality. The East Brandenburg network will significantly increase the range of services for rail passengers through new vehicles and increased frequency. What pleases me most is that electric vehicles with battery storage will now be used on more lines in the future. A change in transport and climate protection in step: a good day for public transport in Berlin and Brandenburg.

Detlef Bröcker, Managing Director of NEB Betriebsgesellschaft mbH: “We are delighted about the award of the contract for the East Brandenburg network and the trust placed in Niederbarnimer Eisenbahn for the implementation of this special project. With the use of the new battery-electric vehicles and the significant improvements in the timetable and service offer, we can contribute to a passenger-oriented and climate-friendly transport turnaround. In accordance with our motto “Home on the Move”, we are leading the East Brandenburg network into the future for our region.”