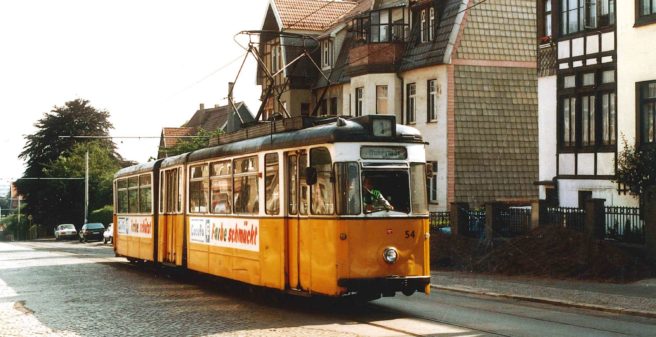 While in Western Germany tramway systems had only survived in major cities, there were still a number of small-town operationes in the territory of the GDR at the time of the political change in November 1989. Nordhausen on the southern edge of the Harz was one of it. The town had a population of about 52,000 in 1989 – today it has just over 41,000.

Two short tramway lines were operated over just five kilometres of track. Both route were quite different in terms of infrastructure and operation: On the one hand, the 3.2 km trunk route 1 ran between the main train station(s) via Arnoldstraße to the central hospital in the northern part of the town, double track throughout and with turning loops at both ends which allowed for the use of Gotha G4 articulated cars. The 1.7 km long line 2 between Arnoldstraße to Parkallee, on the other hand, used bi-directional two-axles vehicles of the Gotha T57 standard model and was single-track with passing loops.

The fleet was almost entirely composed by second-hand tramcars previously operating in other cities. All Gotha G4 articulated trams had been purchased from Erfurt, and most of the Gotha two-axle cars were used before in Gera, Stralsund or Halle. There were no trailers, and the newest vehicles in service were built in 1965.

Our photo report shows the situation in 1990, right after the fall of the Fall of the Iron Curtain, before the first used cars from Stuttgart replaced the entire fleet in 1992/93. Since then, the small network has been extended, including today a joint service with hybrid tram sets on part of the metre-gauge Harzer Schmalspurbahnen to Ilfeld, and several years ago modern low-floor tramways of the Siemens type Avenio replaced all second-hand vehicles. For those who had last visited Nordhausen in 1990 some appearance of the small tram operation is very different today – 30 years later.