Norrköping takes over all Flexity trams from Stockholm 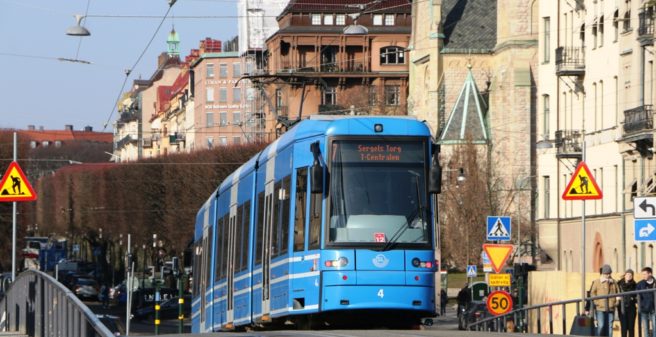 The 15th of December 2020 marked the final daya Bombardier Flexity Classic low-floor tramcar was in service on Stockholm’s city tram line 7 “Spårväg City” for the last time. Together with five identical cars, it will operate in Norrköping in the near future. They were replaced by Stockholm type A35B cars, supplied by the manufacturer CAF.

When Spårväg City started operation on 21 August 2010, they used 3 Bombardier Flexity Classic on loan from Frankfurt/Main (series A34F, no. 262-264) as well as 3 Flexity Classic on loan from Norrköping (series A34N, no. 33-35). They were painted in the (rather unusual) colour “anthracite”. This colour was later changed to the Stockholm tramway house colour medium blue. The German cars still showed signs in their original language inside, only supplemented with additional stickers in Swedish!

The following 6 brand new Flexity Classic (series A34, no. 1-6) were supposed to be delivered in spring 2011, but due to production problems at Bombardier in Bautzen caused by flooding they were delayed on their way to Sweden. The first new car (No. 1) arrived in Stockholm on 2 October 2011. The new, last six Stockholm Flexity Classic, SL series A34, always belonged to the Norrköping public transport company, they were only leased by SL Stockholm. They were therefore painted in dark yellow (Norrköping’s house colour) and foiled in Stockholm blue. The first six Flexity, which were available from the start of operations at Spårväg City in 2010, were returned to their original operators after delivery of the new ones from 2012.

The last Stockholm Flexity Classic, SL series A34, No. 2, finsihed its daily service on the evening of 15 December at the Norrmalmstorg loop. The car then made its farewell journey for a couple of hours on hire by transport enthusiasts. The following day, the car was dismantled for later transfer to Norrköping. Before the farewell trip, the car was used in passenger service on line 7, Spårväg City, all day. Today, therefore, only cars of CAF’s SL series A35B are in service on line 7. The letter “B” in the series designation indicates that the CAF cars are specially equipped for traffic on Spårväg City, e.g. with equipment for switching points from the driver’s seat, registration equipment at the traffic lights, as well as corresponding radio intercom equipment of the operator AB Stockholms Spårvägar.

From the originally quite extensive plans for Spårväg City (a long east-west connection through the city centre, connecting to the Lidingöbahn at Ropsten), very little has been realised so far. In fact, only the extension of the original museum line “Djurgårdslinjen” from Norrmalmstorg to T-Centralen (Klarabergsgatan) was realized. The important connection to Ropsten is still outstanding. It was supposed to have been realised around 2014. Unfortunately, new politicians in the city and the region decided differently.