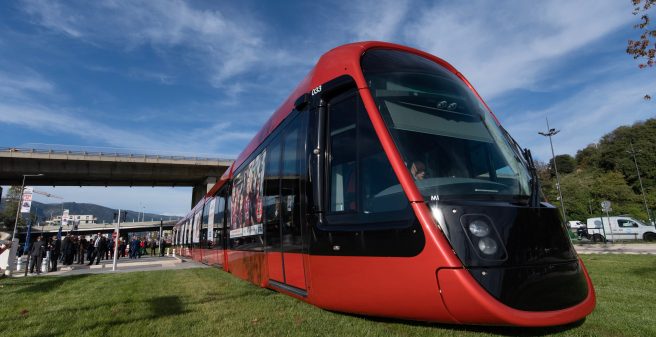 With Fireworks and with the participation of numerous politicians Nice’s third tram route was finally inaugurated on 13 November. Other than the first two lines, the new “T3” is not connected with the city center but it only runs within the City’s Western suburbs. On its route between Saint-Isidore and the airport it also stops at the Allianz Riviera football stadium, which lead Nice’s football club OGC Olympique Gymnaste Club Nice to especially welcome the opening of the new line.

The T3 has 3·8 km of new alignment between Saint-Isidore and Digue des Français and then shares the tracks to the airport with line 2, which was only opened last year. Currently the services are operated with six Alstom Citadis 405A trams running at 12-minute headways but this will be improved to a 10 minutes frequency in the course of 2020. 12 000 daily passengers are expected on the new route. The project cost is approx. EUR 57m.

A Northern extension from Saint-Isidore to Lingostière Centre Commercial is planned in the longer term. The next phase of the Nice tram network to open is an Eastbound extension of line T2 between Jean Médecin and Port Lympia, which is scheduled to open in December.