On the way to Aue: Stage 2 of the Chemnitz model completed 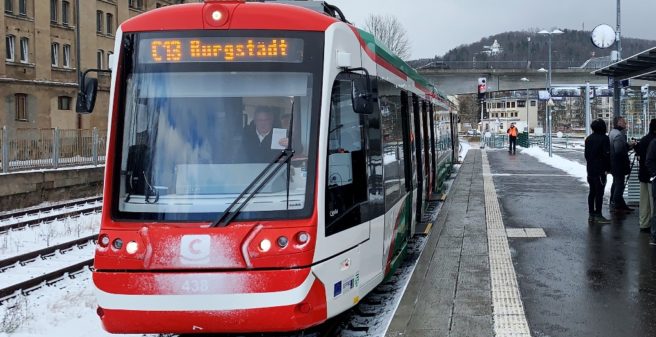 After extensive test runs and a successful “stress test”, the operation of the “Tram-Train” model started between Chemnitz and Aue on 29 January 2022. This marks the completion of stage 2 of the so-called “Chemnitz model”, which provides for the link of the urban tram infrastructure with existing railway lines to allow direct connection from the region into the central city areas. .

In Chemnitz, the existing tram tracks will be used up to the existing Technopark terminus, from where a new 300 meter long line has been built to connect to the existing railway line Chemnitz – Thalheim – Aue – Adorf. The well-known Stadler Citylink dual-system vehicles are in service, operating in electric mode in the city area, and in diesel mode on the interurban line. The system change takes place at the Technopark stop.

Newly built on the 48 km long railway line to Aue are, among others:

– and in the near future 15 new bicycle boxes

We had already reported in detail on the start of construction of stage 2 of the Chemnitz Model here:
https://www.urban-transport-magazine.com/en/construction-work-to-start-for-stage-2-of-chemnitz-tram-train-network/

The 80-million-euro construction project has attracted nationwide attention. It is financed, among others, by tax funds on the basis of the budget passed by the Saxon state parliament, with funds from the federal government according to the Municipal Transport Financing Act as well as own funds from the Zweckverband Verkehrsverbund Mittelsachsen (ZVMS).

Due to the ongoing pandemic, there was no official opening ceremony. Instead, the first Citylink trains set off early in the morning on Saturday, 29 January 2022, from the Chemnitz Zentralhaltestelle (central stop) to Aue and in the opposite direction from Aue to Chemnitz – scheduled operations began. A day later, on 30 January 2022, the Saturday timetable was applied to reinforce the opening service.

The route is served by the extended lines C13 and C14, now with the routing C13: Burgstädt – Aue and C14: Mittweida – Thalheim, each at hourly intervals. Between Chemnitz and Thalheim, the lines overlap, creating an attractive 30-minute frequency.