Only with trailer: VDL Citea electric with Fuel Cell Range-Extender for Connexxion (NL) 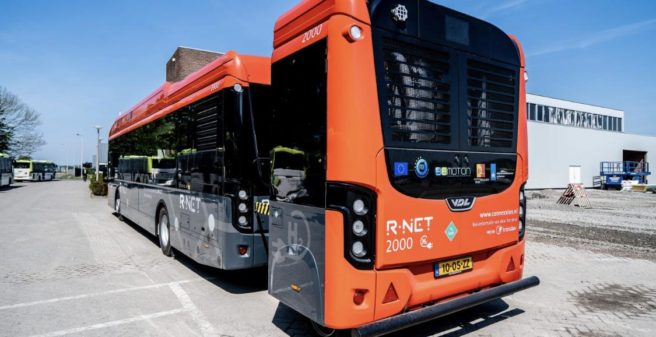 On 8 June 2020 four remarkable vehicles started operation on the regular bus line R-Net 436 from Rotterdam to the Dutch island of “Goeree-Overflakkee”: Four “VDL Citea SLF-120/electric” with a fuel cell as a range extender, to ensure a larger range than any pure battery-electric bus. The buses will be operated by Connexxion as the regional service in the Province of South Holland.

The buses are modified “VDL Citea SLF-120/electric” with batteries for storage mounted on the roof. Without the possibility for opportunity recharging along the bus routes they would reach a range of maximum 200 kilometers at the current state of battery technology.

In order to increase the range, fuel cells have been added. With a full tank, the buses can cover about 350  route kilometres. Refuelling takes place at the Air Liquide hydrogen station in Rhoon, where also the two buses operated by RET in Rotterdam City are being refuelled.

To accommodate the fuel cell package and related elements, a single-axle trailer is permantly coupled to the ebus. The reason for this layout is quite simple: The roof of the vehicles is already equipped by the storage batteries, and space available for passengers must not reduced to accommodate the fuel cell package. The overall concept is quite innovative: The range extender fitted with fuel cells provides electricity directly to the batteries of the electric bus itself which drives the e-motor. The fuel cell package were supplied by Ballard Power while other components of the range extender electric equipment subsupplied “Bosch Engineering GmbH”.

Electric buses permanently coupled with a trailer were already in public service more than 40 years ago. MAN SL buses of the typical 1970s dbody design (“Standardbus I”) ran in Düsseldorf and Mönchengladbach These MAN SL-E Elektro operated in Mönchengladbach on line 9: Ohlerfeld – Mönchengladbach City – Viersen (complete round from Ohlerfeld via Viersen to Ohlerfeld about 25 kilometers.) After each round, however, each of the electric buses had to change the battery on the trailer. This worked without any problems – the author witnessed the battery change in Ohlerfeld himself, but battery range definietly was far away what can be achieved today and – no surpirse – the entire operation did not proof to be economically viable in the long run.

By 2021 another 20 fuel cell buses will operate in Hoeksche Waard-Goeree Overflakkee region as part of the so-called JIVE 2 Project.