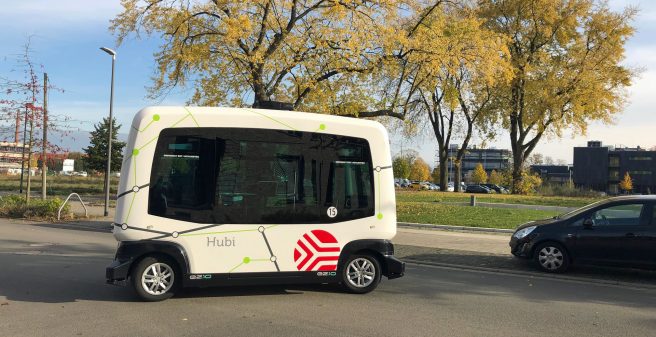 Since mid-June Stadtwerke Osnabrück are testing an autonomous minibus of the French Manufacturer EasyMile, type “EZ 10”. It has no in-house car number but has simply been called “Hubi”.

Phase 1: Test operation on the site of Stadtwerke

In the first four months, EasyMile has driven more than 1000 kilometers while transporting more than 1000 passengers. And they were not just employees the operator. There were other interested parties as well as groups of visitors who wanted to get to know the autonomous bus.

So far, the EZ 10 is only running on a 800 meter long circuit on the grounds of operator. And it had to “learn” this route first. This means, employees of the operator had to program the route first, so that the EasyMile can orient itself along a virtual line.

From December 2019 on, phase 2 is following for the EZ10 vehicle. “Hubi” will run on public streets to serve the “Science Park”.

With the new route starting in December, there will be four new stops served by “Hubi”:

There will also be a connection to bus line 22 (“on-demand connection”).

Of course, “Hubi” must first once again “learn” his its new alignment. This means, that Stadtwerke Osnabrück will program the route into the vehicle. And then it needs be checked if “Hubi” has learned his “lesson” ….

In Germany the Authorities which must approve the use of autonomous buses, are still careful for the time being. This is why “Hubi” is only allowed to run at 15 km/h on public streets. Luxembourg, for example, already allows 25 km/h. And a trained “supervisor” needs to be always on board so that he can intervene manually in case. Osnabrück has found a “nice” name for him: “Steward”., .. (By the way: EasyMile emphasizes that the “EZ 10” could run 40 km/h for a long time …)

An autonomous bus on public streets still requires a specific derogation from the authorities. The one for “Hubi” is still to be granted. In order to prevent any kind of accidents, a parking ban has been implemented alongside the route. Further more, on the streets used by “Hubi”, the traffic will be limited to 30 km/h.