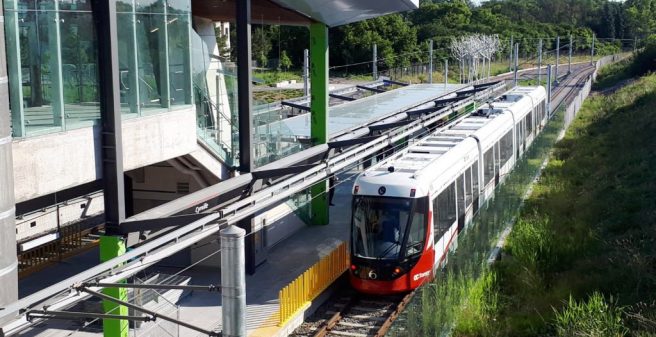 After 60 years: Light rail is back in Canada’s capital city Ottawa! The official inauguration followed by the start of public service of the first 12.5 km of the brand-new Confederation line took place on 14 September 2019.

The Confederation Line is part of the O-train network operated by OC Transpo along with the existing diesel-powered Trillium Line.  The construction of the Confederation line project started in 2013. The project cost is 2.1 billion Canadian Dollars (ca. 1.43 billion EUR).

The new system is by any means quite different compared to the previous large streetcar and interurban network which served the city and its surroundings by 1959. The new route is mainly on surface using its own right of way and grade-separated, partially elevated alignment, but also includes a 2.5 km downtown tunnel section with the three stops at Lyon, Parliament and Rideau. 13 stops are served in total including both termini Tunney’s Pasture and Blair. Most part of the route has be rebuilt from a previous BRT busway / transitway. The system can best be described as similar to the “Stadtbahn” model operating in several German cities.

In a next stage, the Confederation Line will be extended by another 5 stations on 12.5 km from Blair to Place d’Orléans – Trim and by 11 more stops on 15 km to Moodie Drive with a branch to Algonquin. These extensions are to be opened in 2024 (Trim) and 2025.

Alstom has delivered 34 Citadis Spirit light rail vehicles with low-floor access and will do the maintenance for 30 years. All vehicles have been built at Alstom’s installations in Hornell, New York, but final assembly took place on Ottawa itself, in order to assure a certain Canadian content. The light rail cars are of bi-directional design with 7 doors on each side, have 4 modules and are 2.65m wide and 48.4m long. They cope with up to 300 passengers. Another 38 of these vehicles are on order for the extension to be opened in 2024 and 2025. The trains will mostly operate as two-car sets and use 1.500 V= catenary power supply.

Another map can be found here: http://www.urbanrail.net/am/ottawa/ottawa.htm

The new system has not had a great start. Many commuters are saying that the introduction of the O train and the reduction of the bus services have increased the commute times. Commuters who live beyond the eastern and western termini have to take a bus to the terminus and another bus when they leave the O train.There are many that say the initial concept was flawed.