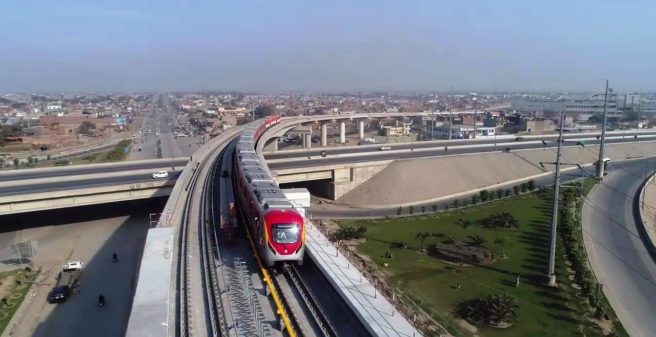 Another country joined the “club”: Pakistan’s first ever metro service started revenue service in the country’s historical city of Lahore, the capital city of Punjab province with a population of approximately 10 million inhabitants in the area. The “Orange Line” was built by an Chinese consortium and is operated with Chinese trainsets. It was constructed – under the so-called China-Pakistan Economic Corridor (CPEC) – by China State Railway Group Co. and China North Industries Corp. With the involvement of olcal-based Habib Construction Services. During the five years of construction, the Orange Line generated more than 7,000 jobs and in the operation and maintenance period, it will create 2,000 jobs for the local population.

The new metro is operated by a consortium of Guangzhou Metro, Norinco International and Daewoo Pakistan Express Bus Service under an eight years O&M contract. The Orange Line covers a total of 27.1 km distance between Ali Town and Dera Gujran and has 26 stations including 24 elevated stops and two underground stations. It is part of a three-lines metro scheme to be implemented in the future in Lahore. End-to-end travel time is 45 minutes.

The official inauguration took place on 25 October 2020 in the presence of Chief Minister of Punjab, Sardar Usman Buzdar. Passenger demand is expected in the range of 250,000 per weekday. The new metro will greatly reduce travel time for commutes in this densiely populated area and will help to imporve the air quality.

A map can be found here: http://www.urbanrail.net/as/lahore/lahore.htm