Paris: Bi-articulated e-buses for the first time and new tramways 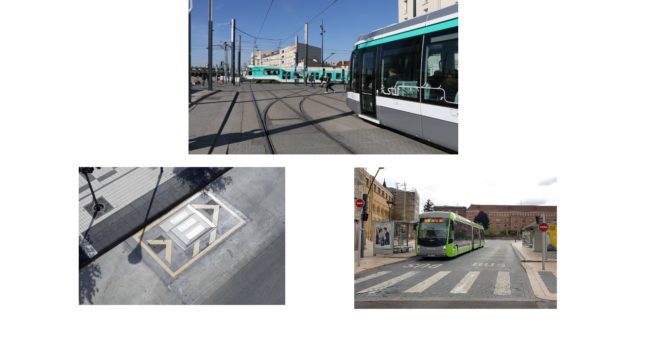 Île-de-France Mobilités, the authority responsible for transport in the Île-de-France region, and the urban operator RATP Paris are awarding two major contracts for high-capacity surface transport – to further expand and modernise the network:

Alstom Transport won a contract for the renewal of the T1 tramway and further extension and increased passenger capacity. In total, the contract includes a maximum of 120 trams for a total of 310 million. An initial firm order for 37 trams has been placed to replace the current trams, some of which have been in service since 1992. An optional tranche of 83 trams is also planned to serve for further network extensions and to increase passenger capacity.

These new trams will be equipped with six double doors of 1.30m per side, including at the ends, to make it easier for passengers to get on and off and to facilitate access for people with reduced mobility- Air conditioning to improve passenger comfort, dynamic and detailed audio and visual information, and video protection are included, too.

The transport capacity will be increased by 15% compared to the current equipment and new services are also planned for the comfort of passengers, such as USB sockets for recharging mobile phones and and 100% LED lighting to improve the atmosphere of the journey.

In addition, these trains will be equipped with an on-board system for counting passengers by flow to measure ridership on the T1 line more accurately and thus improve the service provided.

The motorisation of this equipment will make it possible to reduce traction energy consumption by at least 30% compared to the current equipment. In addition, the trams will be equipped with high-performance electric brakes. Finally, they will be 95% recyclable and 99% recoverable.

The design will be the subject of a call for public consultation by Île-de-France Mobilités, to be chosen between three exterior and interior proposals in a public survey.

Île-de-France Mobilités, the authority in charge of transport in the Île-de-France region, has selected the bid of the VAN HOOL / KIEPE ELECTRIC GmbH / ALSTOM TRANSPORT SA consortium for the construction of the new TZEN 4 and TZEN 5 buses. This choice, validated by the Tender Commission, must be presented to the Board of Directors of Île-de-France Mobilités on 11 October 2021.

Alstom‘s ground contact recharging system – SRS – finds a commercial application on a bus system here for the first time. It was presented as a world first in Málaga, Spain in 2019.

The T Zen 4 and 5 buses, the first 100% electric 24-metre buses in the Paris region, will combine the performance of a tram (frequency and reliability) with the flexibility of a bus. With their own traffic lane on most of their route, with priority at traffic lights, they will be able to carry no less than 140 passengers each in optimal conditions of comfort and modernity: space, light, air conditioning, video surveillance, real-time visual and audio passenger information.

T Zen 4 will replace line 402 on the section between Viry-Chatillon and Corbeil-Essonnes, which is currently the busiest line in the outer suburbs with almost 26,000 passengers per day. The T Zen 4 will therefore provide better comfort for all these passengers.

T Zen 5 is a new bus line that will link the 13th arrondissement of Paris to Choisy-le-Roi via Ivry-sur-Seine and Vitry-sur-Seine in almost 33 minutes.

These buses will be fully accessible to people with reduced mobility (PRM), thanks to their wide sliding doors and low floor, which will make it easier for passengers to get on and off at the station and to move around inside the buses.

Van Hool double-articulated buses have been used as diesel hybrid units in the country since 2013 in Metz and Nimes, among others.

Using a new type of fast charger on such a busy BRT line with large buses is a high risk proposition. Is there enough room at the terminals for extra charging stations? In motion charging (AKA dynamic charging) using trolley wires seems like a much better option for 24 m buses in BRT service. See https://www.straight.com/news/eric-doherty-best-electric-bus-charging-system-is-already-overhead-in-vancouver

Wow! Is there any element of autonomy in the driving and operation of the bus?