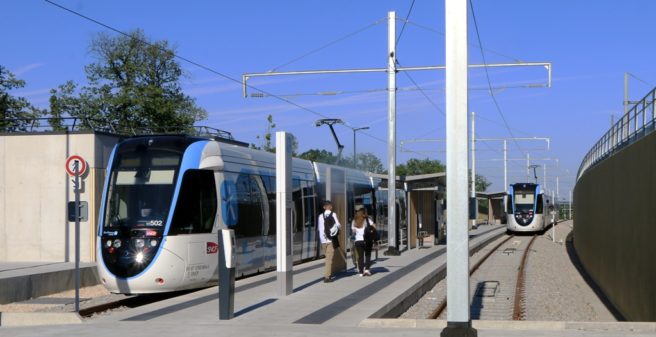 In Greater Paris area, the so-called Île-de-France region, the tramway had returned as a modern means of transport already back in 1992 – various lines of different system configurations have been added since then, meaningfully supplementing the extensive, diverse public transport offering. The “TramTrain” variant, here in the form of low-floor trams and light rail vehicles on (in some cases former) mainline lines, is now also becoming more and more widespread. Since July 6, 2022, another such line in the west of the Île-de-France metropolitan area has been part of this with the new T13. Citadis Dualis from Alstom began commercial operation on line T13 between Saint-Cyr-l’École and Saint-Germain-en-Laye on that day. The operator is SNCF Transilien.

We had already reported on the start of test runs here:
https://www.urban-transport-magazine.com/en/paris-start-of-test-runs-on-the-new-tram-train-t13/

On the 18.8 km long, double-track line, trains run every 10 minutes during rush hour, and every 20 minutes during the rest of the day, serving a total of 12 stations. Seven of them are new and five have been taken over from the previous rail connection. The T13 mainly follows the route of the former Grande Ceinture Ouest railway line, but there are also completely new sections. In the urban area of Saint-Germain-en-Laye, the trains run in right-hand operation, similar to a classic tramway, while on the longer sections in the course of the former regional rail line, they operate in left-hand mode at significantly higher speed.

At the two termini and in Saint-Nome-la-Bretèche Foret de Marly, there are connections to the L, N and U suburban rail lines and to the Réseau Express Régional (RER) commuter rail lines A and C.

About 21,000 passengers are expected to use on the new connection on weekdays. The service itself represents a significant improvement in quality also compared to the previously operated regional rail line L. The financing of the infrastructure of the total project amounting to EUR 306 million was shared by the Région Île-de-France (53%), the central government (17%) and the Conseil Départemental des Yvelines (30%), while the EUR 68.8 million for the rolling stock was borne by Île-de-France Mobilités.

A future extension of the T13 branching off at Lisière-Pereire via Poissy to Achère-Ville, partly along the RER line A, is to be opened in 2024/5.

The T13 is operated by 11 four-section low-floor TramTrains of the Citadis Dualis type built by the local manufacturer Alstom. These add to a total of 41 Alstom Citadis Dualis trains currently in service in the Île-de-France region:

Alstom is currently producing 11 additional tram-trains for line T4, which will replace the existing Siemens TramTrain-sets, built in 2005/2006. In the long term, up to 100 such units are to operate in the Paris region – and up to 200 trains nationwide.