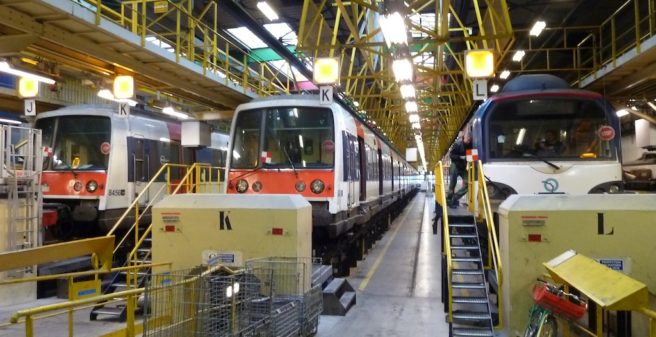 The RER B line of the Paris rapid transit system, which crosses the city from north to south and connects the two major airports Roissy-Charles-de-Gaulle and Orly, is one of the busiest lines in Europe, with well over 900,000 daily passengers in normal times. It is operated on the northern section by SNCF and on the southern section by the Paris municipal transport company RATP. On the central inner-city section between Gare du Nord and Châtelet-les-Halles, it runs together with Line D: 20 trains from Line B and 12 from Line D use the same 2-track tunnel section at peak times, leading to frequent delays and train cancellations. A study by Open Track in 2011 suggested operational improvements, but with the single-deck trains from the 1980s, as opposed to Line D, the limit is being reached.

On the infrastructure side, the operator RATP, together with the public transport authority Île de France Mobilités (IDFM), has invested hundreds of millions of euros in recent years in modernising Line B, such as improving operations and passenger information, as well as raising platforms and other measures to achieve accessibility. For years, however, passengers have suffered from overcrowded trains, whose modernisation over the past decade has brought a more pleasant interior but no increase in capacity.

Therefore, in June 2018, RATP, as lead contractor, invited tenders for a framework contract for the design, supply and related services of up to 180 elements in two batches, namely a firm batch of 146 approximately 104 m long elements each, with an option for a further 34 elements. Originally called “MING” (Matériel Interconnecté de Nouvelle Génération), they are now referred to as “MI20” or “MI21”. The trains are intended to operate under both 1500 V DC and 25 kV AC and are expected to offer 20 to 30 % more capacity than the existing units, which will require double-deck vehicles. It is also to be assumed that the new vehicles will have three doors on each side of the vehicle, similar to the Z 22500 / MI2N on the RER E line, to achieve short passenger changeover times.

A joint bid by the Canadian company Bombardier and the Spanish CAF emerged as the winner of the tender with a contract value of 2.56 billion euros. The defeated rival bid from Alstom is said to have cost about half a billion more. Bombardier would manufacture 60 % of the order, mainly at its northern French plant in Crespin near Valenciennes, and CAF 40 % largely at its emerging French plant in Bagnères-de-Bigorre at the foot of the Pyrenees near Tarbes. The division of labour now sees CAF building the two end carriages of the 146 trains at its plant in Bagnères-de-Bigorre and supplying the bogies produced in Spain. Alstom-Bombardier will take care of the rest, especially the intermediate carriages.

At the beginning of the year, the client was ready to award the order to Bombardier and CAF. However, on 29 January Bombardier was taken over by Alstom and Alstom refused to accept the order and instigated various legal proceedings. Whereas it had once been planned to have the new rolling stock in service on Line B as early as 2021, the tendering process had already postponed the start of deliveries to 2025. A further delay through a new tender would have further shift this date by several years and passengers would have had to make do with vehicles that would soon be half a century old for a long time to come. A much higher price would also have had to be assumed.

IDFM and RATP did not compromise and insisted on the obligation transferred from Bombardier to Alstom. It should be noted that IDFM is one of Alstom’s largest customers with a 25 % share and has threatened to introduce a supplier credibility clause in future tenders. The client has now finally prevailed. On 14 April, the parties reached an agreement. IDFM reported that the contract would be executed on the terms and dates set out in the tender, while Alstom confirmed that it would be able to fulfil the contract and that it had received assurances that the risks raised would be addressed during the execution of the contract. The details of what this means were not disclosed.

Hello and thank you for this article!

Just a small note: the second picture on this article shows a refurbished MS 61 train, which has been retired years ago.

I can’t wait to see the new trains when they’ll get delivered!