Prague: Tatra T6 operation is coming to an end 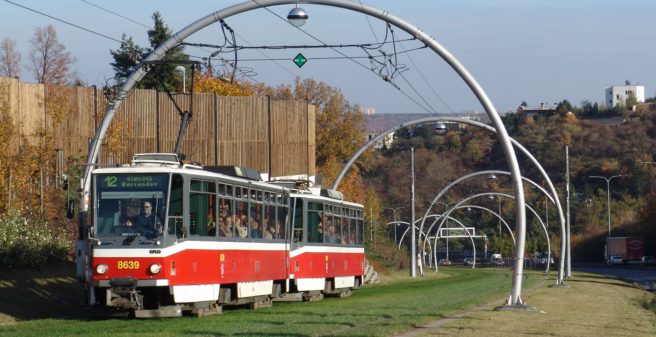 In the 1990s, Prague Transport Authority (DPP) ordered a total of 150 Tatra T6A5 trams in order to modernize its aging fleet, which mainly composed of Tatra T3. They were delivered in 1995, 1996 and 1997 in three series and numbered 8601 to 8750. Before delivery, tests with T6 models had been conducted on the Prague tramway network, which were meant for Dresden and Bratislava.

All T6 trams delivered in 1995 have a 1 + 1 seating arrangement, while the others have a 1 +2 interior design. In Prague, T6A5 trams are used both individually and in coupled pairs. Since both vehicles are electrically connected while coupled, only one of the pantographs is connected to the overhead – typically, the one on the roof of the first vehicle. It is worth mentioning that so-called “stress tests” were conducted on the tram line to Barrandov on November 1, 2003, during which three three-car trains of T6A5 were operating together. In 1998, the only vehicle with a slightly different design of type T6A5.3 started operation numbered 8600. Unfortunately, it was destroyed by an accident in 2012. Car 8671 was also involved in a traffic accident in September 2008 and badly damaged so that it was scrapped one year later. It was the first T6A5 to be permanently out of service in the Czech Republic.

As soon as with the delivery of new 15T low-floor trams in the year 2015, the systematic decommissioning of Prague’s Tatra T6 began. The first tramcar that was shut down was number 8605. A year later, 20 retired Prague T6s were sold on to Sofia (Bulgaria). Since 2016, additionalsales of vehicles took place, for example to the Ukrainian cities of Kiev and Kharkiv (Kharkov) as well as to the Czech city of Brno, see also: https://www.urban-transport-magazine.com/en/new-tatras-in-brno/