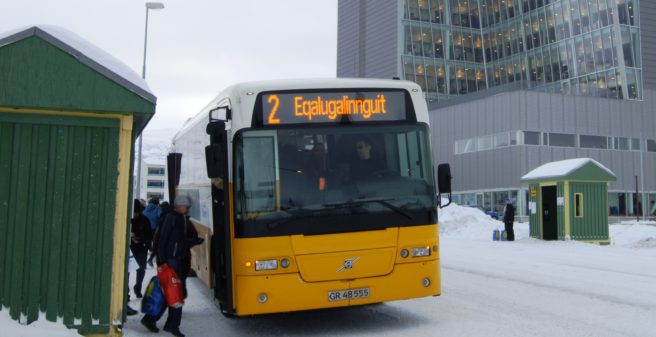 The world’s largest island Greenland – in Greenland’s language Kalaallit Nunaak – is an autonomous part of Denmark. In contrast to Denmark, the country had left the EU in 1982 for economic and identity reasons after a referendum with a narrow majority of the population. Greenland is home to almost 60,000 people. Let’s look around and see what’s going on there.

Nuup Bussii A/S (Nuuk Bus) The company was founded in 1980, to handle bus traffic in Nuuk in a better way than those many small companies before. This has worked out well. With 18 buses (Volvo 8900, MAN Lion’s City, Volvo/Säffle, also some DAB Silkeborg are still going strong) Nuup Bussii carries about 7.000 passengers on 4 lines (1-4). The main lines 1 and 2 connect the city with those modern suburbs Qinngorput and Nuussuaq (with the university) every 20 minutes during the day. Lines 1, 2, 3 are completed with rush hour lines X1, X2, X3, line 4 not. There are about 5.000 cars in Nuuk which run on 120 km asphalted roads, plus some gravel paths.

In 2016 Nuup Bussii tried a Volvo hybrid bus of the first generation, which anyway did not succeed. CEO Mogens Nathansen says that in winter time it run through the streets as a refrigerator with +1 degree Celsius inside. That was enough: Nuup Bussii does not want to be pioneer for new bus technologgy anymore, only use solutions which have been proved already and work well every day. Probably this Volvo hybrid has been sold to Budapest (as well as some same kind buses from Helsinki) and after it to the countryside of Hungary.

Much better news about ticketing: In 2016 Nuup Bussii has invested into a new electronic system from Ridango (Estonia), which works very well. For example the customer is able to load his chip card simply at home via his personal computer. The majority of passengers likes that very much. Anyway traditional paper tickets are available at the bus driver still. Ticket prices are regulated by Kommuneqarfik Sermersooq, which reaches via whole Greenland from coast to coast, encluding also Nuuk at the west coast. On the other side Nuup Bussii A/S has the exclusive rights for the complete city traffic in Nuuk.

As one example for smaller municipalities shall be mentioned the circle line in Sisimiut (Kommunia Qeqqata), runned normally every 20 minutes by Polar Entreprise, which in 2016 have got two new Scania Citywide buses, the first in Greenland. In the whole country run about 75 buses of different size, also quite a lot DAB Silkeborg, partly second-hand from Danmark. There are no articulated buses.

Nuuk has about 18.000 inhabitants at the moment, many especially younger people move to the city from other parts of Greenland, so it may grow up to more than 30.000 in the future. There is the project of a new trabant town east of Qinngorput, called Siorarsiorfik, which of course Nuup Bussii will serve as well in future.

Intercommunal (expensive) means of transport, only aircraft and helicopters are available, as well as some shipping routes in summer. There are no roads. Especially along the west coast, a road conection would be more than desirable for general development, but is not yet affordable. In the future, Nuuk is expected to grow to perhaps more than 30,000 inhabitants, which would be more than 50% of the total population. The city will continue to expand eastwards, especially with the future highly attractive district of Siorarsiorfik. Nuup Bussii A/S will certainly do its part to advance the city and thus the country.

A number of rather small mining and industrial railways, and also for the transport of fish, were part Greenland’s transport system until the 1960s.