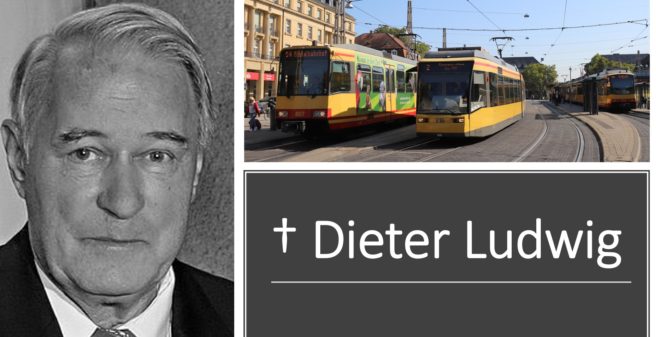 In the afternoon of 16 July, the former managing director of the Karlsruhe transport operator died at the age of 81 in Ettlingen near Karlruhe. His credo was: “We have to bring the train to people” – this vision became the world-famous “Karlsruhe tram train model” and thus the life’s work of Dr Dieter Ludwig.

“The news makes us all very sad. Dieter Ludwig has done outstanding things for our companies, the citizens of the region and for the whole world of transport. With his visionary thinking, his passion and his commitment, he has led public transport in our region into a new era. It will always be an honor and an obligation for us to continue this success story and successfully lead this local transport model into the future”, said Dr. Alexander Pischon, Chairman of the Board of Directors of the Karlsruhe’s local transport operators.

The Karlsruhe City Hall also reacted to the sad news: “Our powerful local transport system, which has a worldwide reputation as the ‘Karlsruhe model’ and which has found numerous imitators, is inextricably linked to the name Dieter Ludwig. It is thanks to his vision, persistence and pioneering work that people in the region can now get to the city center of Karlsruhe or their travel destinations in the surrounding area by tram without interchange. We bow with great respect to his life’s work,” added Dr Frank Mentrup, mayor and chairman of the supervisory board of the Karlsruhe transport operator the services of Ludwig, who was named honorary citizen of the fan city in 2006.

Ludwig was born on 15 July, 1939 in Dortmund, according to Wikipedia in a train. He studied Civil Engineering at the university in Karlsruhe and was earning his students fees by working as a train driver for Deutsche Bundesbahn. After his studies he did a traineeship with DB. In 1967, he joined the AVG. For three decades he was the managing director of the Albtal-Verkehrs-Gesellschaft (AVG), Verkehrsbetriebe Karlsruhe (VBK), the Karlsruher Verkehrsverbund (KVV) and the Karlsruher rail infrastructure company (KASIG) at the top of the Karlsruhe local transport. From 1995 to 2003 he was also President of the Association of German Transport Companies (VDV) and was awarded the Federal Cross of Merit for his lifetime achievement. In 2006, he retired and was also awarded as “honorary member” by the German VDVA tramway association.

Ludwig became known worldwide as the initiator of the “Karlsruhe Model”. His visionary idea of using a two-system vehicle to bring people from the region to the city center of Karlsruhe without having to make a transfer, thereby overcoming the technical boundaries between rail and tram systems, enabled the breakthrough for this unique local transport concept. On 25 September 1992, the world’s first two-system light rail between Karlsruhe and Bretten went into operation. In the following years, the rail network in Karlsruhe and the region experienced an incomparable expansion: During Ludwig’s term, 46 new routes were put into operation and many cities and towns on the Upper Rhine were connected to Karlsruhe by light rail. The total route length of around 80 kilometers in 1976 was increased sixfold within three decades. The number of passengers also exploded and rose from 100 million to around 170 million passengers a year – and earned Ludwig the nickname “Pope of public transport”.

For many cities and metropolitan regions worldwide, the “Karlsruhe model” served as a model for their local transport system. Today, dual-system light rail vehicles operate in Saarbrücken, Kassel, Strasbourg, Mulhouse, Alicante and Sheffield, among others.