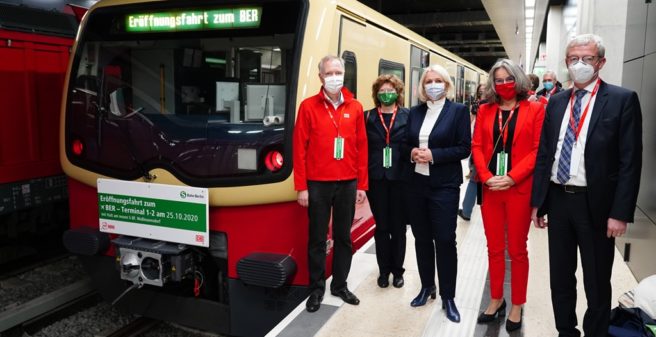 It is probably one of the most (in)famous airports in the world because of its seemingly “endless” completion of the project: Berlin Brandenburg Airport and its rail connection should have opened in 2011 already. As is well known, the construction of the airport has been delayed again and again due to various technical reasons. The new airport will eventually go into operation on 31 October, replacing Tegel Airport, which will be finally closed on 8 November.

The new rail connection to Berlin-Brandenburg Airport has been inaugurated on Sunday, 25 October 2020. Two new stations were built especially for the connection to the capital’s new airport “BER”: the underground barrier-free airport station, located directly under the terminal – and the Waßmannsdorf station. The station between the old Schönefeld station and the new BER connects the Schönefeld district to the S-Bahn network with immediate effect. The new airport railway station is now officially called “Flughafen BER – Terminal 1-2”.

In order to connect the airport railway station to the Deutsche Bahn network, 18.5 km of track for long-distance and regional traffic and 8.6 km for the S-Bahn were built. The total investment for stations and access routes amounted to 675 million euros.

Alexander Kaczmarek, DB Group Representative for the State of Berlin: “I am delighted that planes are finally taking off and landing at the Capital Airport BER. Deutsche Bahn is ready for take-off, stations and routes are operational. We are now bringing guests from all over the world to the new BER Airport using an excellent, high-performance infrastructure. With attractive, fast connections and a modern, barrier-free railway station, we ensure a comfortable and climate-friendly arrival and departure as well as a pleasant stay.

Guido Beermann, Minister for Infrastructure and Regional Planning of the State of Brandenburg: “The new rail link to BER Airport will provide Brandenburg’s citizens with a fast and reliable connection to the world. Particularly noteworthy is the ideal location of the new railway station directly under the BER terminal. This means: short distances from the rail to the plane and back again. Passengers as well as commuters can now leave their own cars even more often and instead make their journey to and from the airport stress-free and fast by train.

Regine Günther, Berlin Senator for the Environment, Transport and Climate Protection: “The new BER airport is closely linked to the public transport system. The numerous connections of S-Bahn lines, the new Airport Express, other regional trains and buses enable a fast and comfortable journey, protect the climate and the environment and furthermore connect the metropolitan region Berlin-Brandenburg”.

Engelbert Lütke Daldrup, CEO of Flughafen Berlin Brandenburg GmbH: “We are delighted that the airport railway station is going into operation today and would like to take this opportunity to thank our partners for the fact that even in difficult times, a partnership-based, constructive and solution-oriented cooperation was possible. With the efficient railway station directly under Terminal 1, BER has an important unique selling point compared with all other major German airports. The possibility of taking the lift from the platform to the check-in hall is unique in Germany. The rail friendliness of BER sets standards for environmentally conscious travel”.

In future, regional and long-distance trains as well as the Berlin S-Bahn (suburban railway) will stop under the airport on a total of six tracks. For the public, both the station and the DB travel centre are open daily from 7 a.m. to 10 p.m. from Monday, 26 October 2020. Passengers can obtain tickets and information here. In addition, two service guides support passengers at the ticket machines from Monday to Friday between 9 a.m. and 5 p.m.

S-Bahn already in operation, local and long-distance traffic will follow

From Monday, 26 October 2020, the S9 is running from Spandau every 20 minutes, initially in the mornings and evenings, via Terminal 5 and Waßmannsdorf to Terminal 1-2, and on Thursday, 29 October the scheduled operation of the S45 and S9 lines to the new airport began. This means that an S-Bahn is now stoppinh at BER every 10 minutes.

With the opening of the airport on 31 October, local and long-distance traffic will then also bring travellers to the airport. A total of three regional railway lines (RE7, RB14, RB22) plus the airport express (FEX) will stop at BER Terminal 1-2 from 31 October, providing fast connections between Berlin Hbf or Ostkreuz and BER four times an hour during the day. The S-Bahn also offers six additional journeys per hour.

Long-distance trains will also be stopping under the terminal in the future: With the intercity line Warnemünde – Berlin – Dresden, the BER airport railway station can also be reached quickly and without changing trains by passengers from Mecklenburg-Western Pomerania and Saxony. The journey time from Rostock to BER is two and a half hours, from Neustrelitz it is one and a half hours. The journey from Dresden also takes just over 90 minutes. The modern intercity double-decker trains run every two hours.

In addition to the rail network at BER, the buses of Berlin’s public transport operator will be responsible for around 20 percent of public transport here. BVG and its partners have put together a comprehensive package of services for this purpose. This includes four day and four night bus lines which will operate at the new terminal building. These include two completely new lines.

The X71 will start on 8 November and take passengers from the Alt-Mariendorf underground station to Terminal 1 of the BER with only 10 stops.

With the N7X, BVG offers its first night express line. During the interruption in service of the S-Bahn and U-Bahn, the line will run six times between approx. 2:30 and 3:45 a.m. from the S-Bahn and U-Bahn station Zoologischer Garten to both BER terminals, thus primarily benefiting airport employees and early birds.

There will also be some changes in bus services beyond BER, especially in the night traffic in the south of Berlin. Here, for example, the new N64 line will provide a night-time connection from Wuhletal S-Bahn and U-Bahn station to Adlershof S-Bahn station.

When the lights go out at Tegel Airport on 8 November, the bus service there will also be adjusted accordingly. While some lines will get a new route and will be partially reinforced, Berliners will have to say goodbye forever to lines X9 and TXL.

More information about the Berlin Brandenburg transport network can be found here: