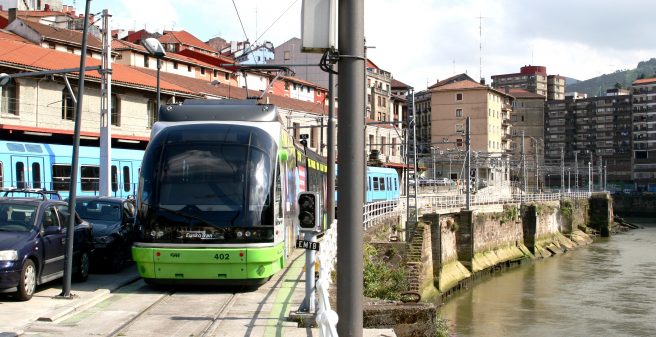 Connection between the tramway and the suburban railway at Atxuri | © UTM

On 8 September the last meter-gauge train left the well-known terminal station Atxuri in Bilbao – some 105 years after its inauguration. The suburban and regional trains to and from Bermeo, Amorebieta and San Sebastían now all use the tracks of metro line 3 from Kukullaga-Etxebarri via central Bilbao to Matiko. This third metro line in Bilbao opened on 8 April 2017 and – just like the entire meter-gauge network – is operated by the regional public transport entity Euskotren. The trainsets for metro line 3 and the regional services are basically identical and allow for end-to-end operation between both systems

Euskotren will convert the closed train section between Atxuri and Bolueta to low-floor tramway operation, starting already in 2021 as the Basque regional administration agreed upon last month. Bilbao’s meter-gauge tram has its terminus at Atxuri station, and the rails are connected to the suburban railway anyway as the tramcars already use the railway line for a short distance to access its depot facilities.

Other plans consider an extension of today’s single route from La Casilla to Abando – the future tramway network would be a circle line with a branch via Atxuri to Bolueta. Another new route to Zorrozaurre is under study, too. The purchase of new vehicle is planed to cope with the increased passenger demand, however, as a first step 4 tramcars from Vitoria will be sent to Bilbao as soon as the first of the 7 new vehicles on order arrive.

A map illustrates the rather complex layout in Bilbao: http://www.urbanrail.net/eu/es/bilbao/bilbao.htm