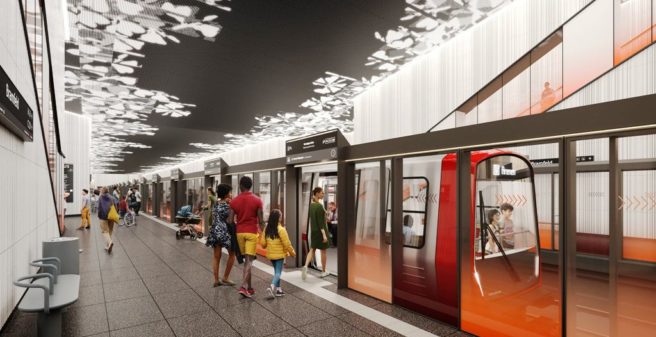 The Hamburg Authority for Economic Affairs and Innovation (Behörde für Wirtschaft und Innovation BWI) has granted planning approval to the city’s public transport operator Hamburger Hochbahn AG (HOCHBAHN) for the first section of the U5 from Bramfeld to City Nord. As part of the planning approval process, which has been ongoing since the summer of 2019, the authority checked that the plans complied with legal requirements and weighed up private and public concerns, and ultimately approved the construction project.

With the decision now in hand, HOCHBAHN can place the orders for the preparatory construction works – and it will do so before the end of October.

The first section of the U5 line, around 5.8 km long, will run from Bramfeld via Steilshoop and Barmbek-Nord to City Nord, thus closing important gaps in the network. At Sengelmannstrasse stop, there will be an interchange to the existing U1 line to the center of the city. On its first section, the U5 will connect districts with more than 100,000 inhabitants and over 30,000 jobs to Hamburg’s rapid transit network for the first time after decades of planning and preparation. On the first completed section of the U5 from Bramfeld to City Nord, approximately 20,000 passengers are expected every working day; once the entire U5 has been completed, the figure will rise to approximately 40,000. The new U5 is set to become significantly longer in the future: It will run via Winterhude to the city center, with the central transfer stations Hauptbahnhof, Jungfernstieg and Stephansplatz, and from there continue via the University, Grindelberg, UKE (Unfallkrankenhaus Eppendorf), Hagenbeck’s Tierpark (zoo), Stellingen to the Arenen Volkspark. The entire U5 will be the first Hamburg subway line to be operated fully automatically.

The U5 East runs for 5.8 km and five stops, of which only 400 meters including the Sengelmannstrasse station are above ground. The 1.4 km section to City Nord will be built using the cut and cover method, while the section via Steilshoop to Bramfeld will be built underground using shield tunneling.

Total construction costs for the U5-Ost line amount to approximately 1.8 billion euros. The first trial operation is scheduled to start in 2027.