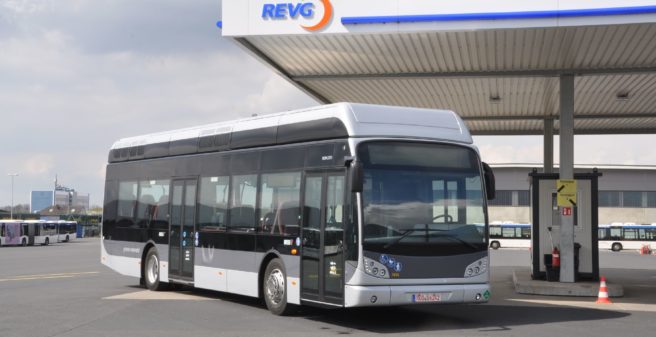 This summer, the district council of Germany’s Rhein-Erft district (“Kreis Bergheim”) will decide which alternative energy source the buses of its own, public Rhein-Erft Verkehrsgesellschaft (REVG) will use in the future. Since the first new buses are supposed to be put into service at the turn of the year 2023 / 2024 and given the delivery period of currently 16 months, REVG will have to decide in the foreseeable future what kind of alternative drive they want to opt for.

After two battery-electric test vehicles last year and a hydrogen bus of the Solaris “Urbino 12 hydrogen” model in February 2021, a second hydrogen bus was undergoing testing by the REVG, this time a Van Hool New A 330 FC. Interestingly, REVG did not borrow one of the numerous vehicles of this type from the neighbouring company RVK, but instead Van Hool provided a demonstration vehicle.

Like the other demonstration buses in the previous test cycles, Van Hool’s bus was being used on lines 961 and 965.

Lars Mörl, head of the “REVG emission-free 2030” project, is satisfied with the vehicles and summarises the result of the test: “The bus ran stable and reliably and scored also because of its easy handling in day-to-day operation.” Van Hool mentions further improvements in refuelling and frost protection for the upcoming fourth generation of its fuel cell bus. The heat generated by the reaction of the hydrogen in the fuel cell is already used for the heating and air conditioning of the bus.

During the test, care was taken to ensure that the Solaris hydrogen bus tested in February and now the Van Hool one were used under conditions that were as similar as possible, in order to be able to compare the driving behaviour, energy consumption, range and operation of the vehicles.