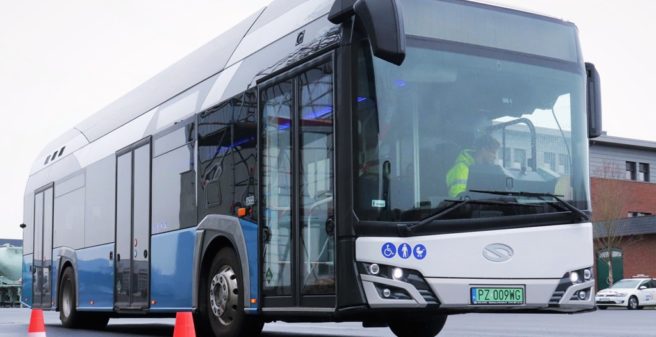 The test vehicle at REVG | © REVG

On 1 June 1976, the bus operations in the greater Cologne/Bonn area of the two federally owned transport companies Deutsche Bundesbahn and Deutsche Bundespost were merged into the “Regional Verkehr Köln GmbH” (RVK). In 1986, RVK became a member of the Verkehrsverbund Rhein – Sieg (VRS). In the nineties, eight municipal public transport operators took over the previously state-owned RVK., each taking a 12.5% equity stake in the RVK:

Some of the new owners, were mere concession holders of the bus routes in their respective areas, with operations being subcontracted. KVE and REVG were among them, both did not operate any buses on their own.

Effective on 1 January 2019, the Bergheim district changed its strategy: It now established its own bus operating company with its own buses. The new company, under the unchanged name Rhein – Erft Verkehrs Gesellschaft (REVG), is based with its main depot in the centrally located town of Kerpen. New buses are mainly leased, some of them are Mercedes (Citaro) but most of them are Scania (Citywide 12 LE). Apart from a large articulated bus order for the Berlin BVG (Citywide 18 LF), this is the largest order for regular service buses that Scania has ever won in Germany.

The leasing contracts give REVG the right to return the first vehicles of these contracts to their manufacturers at the turn of 2023 / 2024.

And this is precisely what REVG is now preparing for. In a meeting on 16 February, the REVG supervisory board discussed the question, which drive technology the future REVG buses should have. It becames clear that the new fleet will no longer include diesel buses. In the interest of environmental protection, buses with alternative drive systems will be added to the fleet. This decision is also in line with the EU’s Clean Vehicles Directive. In order to find out what technology might be the right choice, vehicles from different manufacturers and with different drive concepts are now being tested. In the middle of the year, the district council of the Rhein-Erft district (Bergheim district) will decide which drive concept the REVG buses will use in the future.

The tests started last summer with a 12.9 metre long VDL Citea SLE-129/electric with battery-electric drive. It completed its service on lines 961 and 965, which have a common terminus at the Weiden-West light rail terminus in Cologne, so that the vehicle could also change lines there. In addition, one bus each with a gas engine and hybrid drive were tested.

With the test vehicle in use by REVG, the operatore has not only changed the manufacturer of the bus, but also the drive concept. The busis not only regular Solaris, but a “Solaris Urbino 12 hydrogen”, i.e. a 12-metre long bus powered by a fuel cell. It doits rounds on lines 961 and 965 (to compare with the test results of the VDL vehicle), but in addition there is also a service provided on line 979, which is a line with a relatively long running distance from Hürth to Zülpich. Especially because the Cologne / Bonn region is quite “urbanised”, findings from a line that has such a long section with an interurban character are interesting.

By the way, the neighbouring company RVK is using hydrogen buses since last summer. RVK has made its experiences with these buses available, and it is now being taken into account in the evaluation of the fuel cell bus operations at REVG.

For refuel, the Solaris test vehicle drives to the public hydrogen filling station of “H 2 Mobility” in Kerpen’s neighbouring town of Frechen. This is closest to the REVG depot and it s also used by RVK for the refuels of its fuel cell bus fleet.

One aspect to take into consideration by REVG is the fact that – in case they decide to use fuel cell buses – no manufacturer offers hydrogen buses on lease. Instead, you have to buy them.

By the end of 2030, REVG wants to have converted its entire bus fleet to zero-emission buses.

made of composite material and impregnated with resin, made of continuous fibres, with non-metallic inner coating

Two electric drive motors of 125 kW each, integrated in the drive axle

CO2 air-conditioning system with heat pump, cooling capacity 20 kW, CO2 as refrigerant, supply of heat and cold from outside, the waste heat of the fuel cell is used