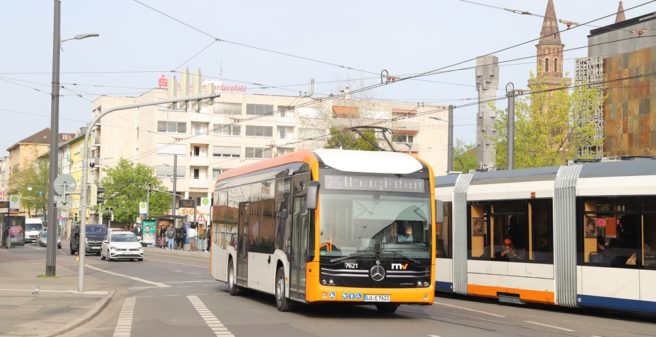 eCitaro in operation in Ludwigshafen | © UTM

On 11 April 2022, the Rhein-Neckar-Verkehr GmbH (RNV) officially inaugurated brand new 15 Mercedes-Benz eCitaro at Berliner Platz in Ludwigshafen for urban transport in the city with Germany’s largest chemical factory. They replace diesel buses that have been in use up to now.

However, RNV is not only responsible for urban transport in Ludwigshafen. Rather, it serves the entire public transport system in the metropolitan region from Bad Dürkheim via Ludwigshafen and Mannheim to Heidelberg. And so the total order to “Daimler Truck” consists not only of 15, but of 30 eCitaro. The 15 additional ebuses will be delivered by June and will provide urban bus services in Mannheim and Heidelberg.

RNV is pleased to point out that the Mercedes eCitaro comes from the local region: It is built just across the Rhine in the neighbouring city of Mannheim.

RNV’s new eCitaro are around 12.20 metres long. They can carry 75 passengers, with seating and standing room added. Their battery has a capacity of 441 kWh, their dimensions are 2.00 metres by 0.87 metres, and they weigh 3.15 tonnes. This gives the cars a range of 230 kilometres. The first eCitaro, which RNV procured for Heidelberg in 2019, still only managed 120 kilometres: three years later, almost double the range! – The batteries have made huge progress. More on that in a moment.

3.15 tonnes: isn’t that a lot? Well, if you consider that in the first half of the 1970s electric buses were used (on a trial basis) in Koblenz, Munich, Mönchengladbach and Düsseldorf, which had to pull their voluminous batteries behind them on an extra battery trailer like an articulated bus, then the huge progress that the battery bus has made in recent years is striking. (Note: those battery buses with the battery trailer were actually registered as articulated buses and not as buses with trailers. This could be seen very easily: the entire vehicle combination had only one registration number (identical for both parts of the vehicle), and there was no registration number at the rear of the front vehicle, because unlike a bus with a trailer, the vehicle was not yet finished. The rear only came with the end of the battery trailer).

The costs for all 30 new Mercedes eCitaro for RNV and the charging infrastructure amount to just over EUR 25 million. Almost EUR 10 million of this will be covered by the Federal Ministry for Economic Affairs and Climate Protection as a subsidy.

Fifteen charging points have been created at the Ludwigshafen bus depot in Rheingönheim in recent months – so there is a separate charging point for each bus. This means that all the buses can be recharged at the same time during the nightly breaks. “The buses are fuelled by 100 % green electricity.

And the use of the new electric buses was preceded by special electric training for the workshop team and the drivers.

Christian Volz, the CFO of RNV, says: “We have been investing a lot in the electrification of our bus fleet for years. From our point of view, this is an investment in the future. The acquisition costs of about 11.5 million euros for the buses and the charging infrastructure in Ludwigshafen are money very well spent.” And he justifies this: “Calculated over the lifetime of the buses, it pays off: at current fuel prices, the energy costs per kilometre for a diesel bus are about 60 cents, while for an electric bus they are only about 25 cents. And this gap will in all likelihood widen further in the future.”

Alexander Thewalt, head of the building and environment department of the city of Ludwigshafen, points out the ecological advantages of the new eCitaro. “They consume fewer resources in operation. And they improve the air and quality of life in our city because they are emission-free on the road.”

Rüdiger Kappel, Head of Fleet Sales at Daimler Buses Germany, adds a nice aspect: since the eCitaro are built at the Mannheim plant, the employees of the Mannheim plant could, after all, drive to work in the future with electric buses that they would have built themselves.