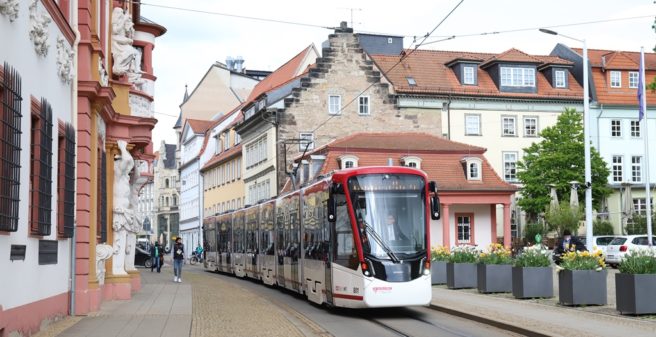 On 20 May, the first Stadler Tramlink tram was presented to invited guests and the press I © UTM

A tram “built by a Swiss-German company with Spanish craftsmanship and passion”. With these words, Peter Zaiß, Managing Director of Stadtwerke Erfurt, presented the first of the new Stadler Tramlink low-floor tram to the press, politicians and invited guests from EVAG and the suppliers Stadler, Kiepe, TÜV Rheinland as well as the technical supervisory authority on 20 May 2021.

The first maiden trip across Erfurt

The first of a total of 14 new Tramlink low-floor trams had its maiden voyage on 20 May 2021. After delivery at the end of March and subsequent intensive tests and trial runs on EVAG’s route network, the time had now come: the first new tram has been rolled out. Car 801 made its first round through the city with the invited guests. The trams were manufactured at Stadler’s Valencia Albuixech plant in Spain, where the remaining 12 cars as well as the tramlinks for Augsburg and Jena are also currently produced.

The tram with the number 801 is the first of a total of 14 trams that will be running in the state capital Erfurt in future. From the beginning of June, it will be operated on the BUGA line (line 2) and will connect the two National Garden Exhibition sites egapark and Petersberg.

The vehicles were purchased with the support of the European Regional Development Fund (ERDF) and the Free State of Thuringia. 47% of the acquisition costs amounting to 56 million euros (4 million euros per vehicle) were subsidised. EVAG, as a subsidiary of SWE Stadtwerke Erfurt GmbH, financed the remaining amount with its own funds. This is the first ERDF funding for trams in Germany. Dresden’s DVB also took this route for the financing of its new tram.

It is particularly worth mentioning that the ERDF funding was only possible thanks to the fact that the new vehicles were equipped with innovative energy-saving systems that ultimately also reduce the calculated CO2 emissions. A heat recovery system, a demand-based recirculation control with CO2 sensors, optimised heaters as well as displays with the traction energy consumption indicator for the drivers have been implemented. Weight reduction measures have also been introduced.

Part of the ERDF funding is therefore also a so-called energy efficiency test, in which the contractually committed CO2 reduction of some 7 grams CO2/ kilometre must be demonstrated. Of this, a reduction of 3.5 g CO2 falls on the traction energy and 3.7 g CO2 on the air conditioning or heating.

The manufacturers Stadler and Kiepe have invested a lot of effort and inventiveness in the new Tramlink tram. The technical project managers proudly presented their innovations on 20 May. The waste heat of the water-cooled engines is made available to the air-conditioning or heating units via recoolers – quite a novelty for trams. Thanks to the heat recovery, about 10% of energy can be saved over the year, mostly in the cold season, of course, when the heating demand is highest.

The CO2 sensors installed inside the vehicle measure the CO2 content in the vehicle, which increases depending on the load. The more passengers board, the higher the CO2 content. In this case, the air conditioning system transports fresh air into the interior of the car. When the train is empty, only as much fresh air as necessary is provided. This saves energy.

If there is excess braking energy, for example during off-peak periods or on sections of the route where no other vehicle can absorb the braking energy via the grid, the intelligent heater control uses this energy.

The technicians from Spain, Germany and Switzerland paid special attention to weight reduction. The customer had clear specifications here. At 52.53 tonnes, the eight-axle seven-unit weighs almost 4% less than comparable low-floor trams. This, of course, also has a positive effect on the traction energy consumption.

Start of operation in June

At the beginning of June, the first two new Tramlink trains are to go into service on tram line 2. TÜV Rheinland Intertraffic is consulting EVAG in the commissioning and testing process and has also been consulting the operator during the tender process which started in 2018. In principle, however, the new trams can be used on the entire network and are intended to provide more capacity on Erfurt’s tram network. At 42.49 m, the new trams have over 10% more capacity than the existing 30 m and 35 m vehicles of the.

Step by step and depending on the state of preservation, the oldest MGT6D low-floor trams of the first generation from 1994 might also to be replaced, whereby a lot certainly depends on how and whether passenger numbers recover after the Corona crisis. Structural problems in the car bodies of the Duewag/Siemens MGT6D built between 1994 and 1998, as observed in Bochum, are not known in Erfurt.

With regards to the optional Tramlinks, EVAG and the industry are also hoping to place another order for 10 additional “low-floor trams”, the financing of which has not yet been secured.

Already during the rollout of the Tramlink at the Magdeburger Allee depot, it became clear to all invitees: “this vehicle makes almost no noise!” In fact, the vehicle is free of disturbing electronic noise. The optimised control of the inverters developed by Kiepe ensures that the noise emissions both inside and outside the vehicle are audible but pleasantly quiet.

The interior of the 42-metre vehicle with stainless steel body can accommodate up to 248 passengers in the generously designed interior of the vehicles, 102 of them on seats. The S-shaped corridor, which was known from previous Tramlink projects, has been straightened and is hardly noticeable anymore. Platforms and ramps do not exist in this chassis concept with continuous wheelset shafts. The patented design of the bogies allows the bogies to turn out, which makes cornering much smoother. Thanks to the links attached between the running gear and the carriage body, a parallelogram is formed in curves, whereby the pivot point moves forward from the centre of the running gear.

The door concept is also new. Via green or red flashing LED light strips, it shows the passenger whether safe boarding or alighting is possible.

The colour temperature of the LED interior lighting adapts to the time of day and the outside temperature: Cooler colours in warm weather and warmer colours in cool weather.

In order to improve accessibility for visually impaired passengers waiting at the stop, the new Tramlink tram was also equipped with the acoustic announcement system from GSP, which is already used in the old EVAG vehicles. In order to be able to announce line number, destination and stops, electromagnetic exciters were installed in the side walls, which transmit vibrations to the outer skin. The noise-dependent volume control (GLR) as well as the intelligent night-time reduction of the volume also avoid unnecessary annoyance of residents of the Erfurt tram routes. The Erfurt Association for the Blind was also involved in this development project between GSP, the Erfurt public transport company and the Erfurt University of Applied Sciences.

“With the new trams, we are ensuring stable local public transport in the Mittelthüringen transport association and making our personal contribution to reducing carbon dioxide and particulate matter. In order to be able to establish local transport as a modern and attractive alternative to private transport in the future, we continue to hope for the support of the Free State of Thuringia and funding programmes from the EU,” says Peter Zaiß, Managing Director of SWE Stadtwerke Erfurt GmbH.

“We are very pleased that with Stadler and Kiepe Electric from Düsseldorf we were able to win such experienced and competent partners for this major project. The integration of the longer vehicles into our existing rail network was a challenge. Extensive tests were necessary, but we were happy to take them on, because the trams are a great benefit for Erfurt, and not only because of their greater capacity,” emphasises Myriam Berg, EVAG board member.

Jure Mikolčić, CEO Stadler Germany: “The Tramlink improves ride comfort for passengers and drivers. The new trams are equipped with air conditioning and create a friendly environment with an open feeling of space, high-quality materials and complete continuity. The drivers’ daily work routine is also improved: the ergonomically designed driver’s workplace allows for good all-round visibility. It is also equipped with a modern touch screen.”

“EVAG’s sustainable mobility concept is convincing and we have put together a comprehensive package of electrical systems for the vehicles that are perfectly matched to each other and to the Tramlink platform,” says Alexander Ketterl, Managing Director of Kiepe Electric.