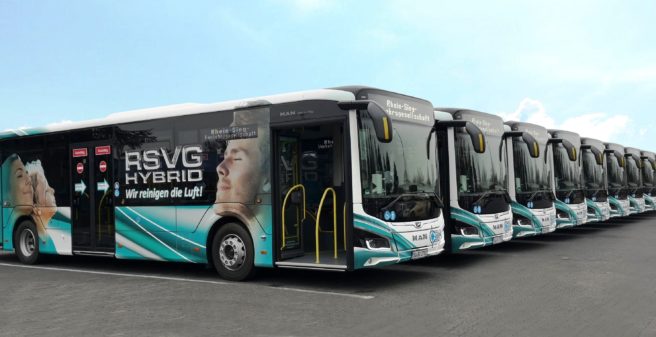 The Rhein-Sieg Verkehrs Gesellschaft (RSVG), the public transport operator in Troisdorf in the south of Cologne, is preparing for the conversion of its bus fleet to environmentally friendly propulsion. This year, for example, it will procure a total of 66 hybrid buses from MAN: 39 articulated buses of the type “MAN Lion’s City 18 Hybrid” and 27 x 12 meter buses of the type “MAN Lion’s City 12 Hybrid.” The first 36 of these buses are currently being delivered. The remaining 30 buses are expected to arrive at RSVG at the beginning of the third quarter 2020.

The technology of the new buses

The new hybrid buses meet the particularly strict “Euro 6 d-TEMP” emission standard. They replace older Euro 3, Euro 4 and Euro 5 diesel buses. In other words, the bus fleet will become much cleaner in terms of emissions.

Thanks to their intelligent energy management, the diesel consumption of the buses is significantly reduced. As a result, less pollutants during combustion and, above all, CO2 is emitted to the atmosphere. The new buses are also significantly quieter than older models.

RSVG Managing Director Reinhardt emphasizes: “With their hybrid drive, our new buses are particularly environmentally friendly. When braking, electrical energy is recuperated and stored in the batteries. With the stored energy, the bus will accelerate in the next cycle. This is why the diesel engine has to provide less energy.”

Diesel consumption is also reduced by an automatic start-stop function. If the bus stops at a station, in front of a traffic light or, for example, in a traffic jam, the diesel motor automatically switches off. The next time the driver throttles, the engine also automatically restarts.

In addition, the new hybrid buses of the RSVG also reduce the diesel consumption, because the buses have a lower weight compared to their older predecessors. The body work is of glued instead of being screwed and bolted.

By the way, it should be noted that the new hybrid buses are fully air-conditioned.

Better air in the city thanks to hybrid buses

Managing Director Reinhardt summarizes: “Thanks to lower fuel consumption, not only CO2 emissions are significantly lower. With regards to emissions, the number of particles and the mass of particulate in the exhaust air of the vehicles will have lower concentrations than the urban ambient air.”

It is noticeable that the buses have three doors and the articulated buses have four doors. The RSVG justifies this by the fact that passengers have become increasingly used to standing near the doors in order to be able to disembark as quickly as possible. So what could be more obvious than to make sure that people spread more evenly throughout the bus? Managing Director Otto adds that “the additional door will speed up entry and exit so that buses can better meet their timetable.”

The buses will carry the livery of RSVG, introduced a few years ago, with a white background on which wavy stripes are glued in several shades of blue between dark blue and turquoise. They also show the large inscription “RSVG Hybrid”, which is supplemented by “We clean the air” (in German: “Wir reinigen die Luft”). Finally, the buses will be decorated with the heads of three persons, quoting the RSVG, “breathe with pleasure”. This slogan will symbolize that these new buses are clean.

RSVG is investing around 19 million euros for the 66 new hybrid buses. This is the largest investment in the company’s 48-year history since its foundation on 1 January 1972. Managing Director Otto: “The clean and fully air-conditioned vehicles significantly increase the quality of the RSVG fleet and make public transport in the district even more attractive.”

The history of the RSVG

Today’s Rhein-Sieg kreis was created with the planning of the greater Bonn area on 1 August 1969. As a result, there were three transport companies within the county boundaries, namely:

From 1 January 1972,the Rhein-Sieg Kreis merged these three companies into the “Rhein – Sieg Verkehrs Gesellschaft”, which moved its headquarters to Troisdorf-Sieglar to the premises of the VRSK.

When it was founded, the RSVG had a very diverse bus fleet. There were buses of the brands Büssing (from the RSE and the VRSK), Magirus (from the SVG), Mercedes (from the RSE and the SVG) and MAN (from the SVG). The new company immediately ensured that the bus fleet was standardised: until the 1980s, only new MAN buses were purchased. With the exception of three Mercedes O 305s, which the RSE had ordered before the merger, but which had already been delivered to the RSVG and carrying the RSVG’s livery from the beginning: white with dark blue.