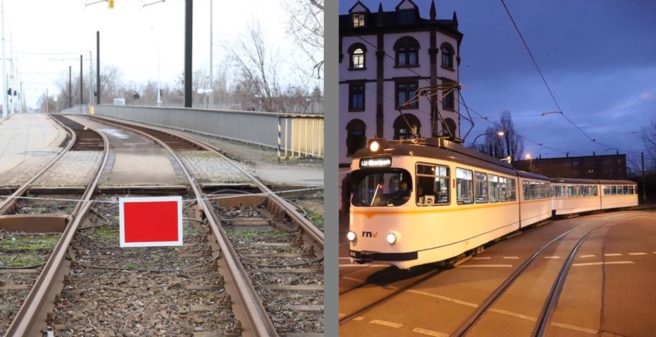 At the end of 2019, two bridges gave the public transport operators in Brandenburg an der Havel and Ludwigshafen am Rhein a real headache: in both cities, two old bridges led to severe transport and tram disruptions in both cities. The outcome of two respective assessments was that both bridges are no longer safe. Car and tram traffic had to be stopped immediately. As the demolition, and reconstruction will take several, tram traffic will be disrupted for some time. The details:

Already since August 2019, the southern inner-city highway viaduct was largely closed to car traffic, so that motorists could no longer commute across the Konrad-Adenauer Bridge to Mannheim. At the end of 2019 it turned out that the bridge was in danger of collapsing, so that for safety reasons the tram traffic in the immediate vicinity of the bridge also had to be stopped.

The trams were therefore no longer allowed to cross to the old Rhine bridge, which connects Ludwigshafen directly to Mannheim city center and to the main train station. As a result, tram traffic was only allowed to run to Mannheim via the bottleneck Kurt-Schumacher-Bridge, north of the two city centers. This also led to the fact of the central Berliner Platz junction was suddenly free of trams. Tram traffic on line 6 to Rheingönheim and line 10 to Luitpoldhafen was suspended. The tram depot in Rheingönheim is now only accessible by an operational route that has been closed for passenger traffic.

S-Bahn/ Commuter rail services are not affected by the disruptions. The station in Ludwigshafen Mitte remains open and the S-Bahn continues to operate via the Konrad-Adenauer-Brücke as the rail bridge is lying next to the critical bridge.

The Federal Ministry of Transport has already announced that it will finance the demolition of the viaduct in Ludwigshafen and the subsequent construction of a ground-level, 660-meter long city road with 154.2 million euros.

Already in the summer of 2019 transport operator RNV decided to increase tram operations by 7 January 2020 in order to make switching from cars to public transport easier for commuters. This included more dense timetables on lines 4 and 9 to Oggersheim and a new line 6E to Rheingönheim, which was to be operated with the old, still existing Düwag trams.

Due to the disruptions, this plan was not realised. In order to bring tram operation in Ludwigshafen „back to normal“, the bridge has to be removed first. The goal is to demolish the viaduct by summer 2020 so that at least the tram traffic on lines 6 and 10 can be put back into operation. It is not yet clear when the elevated road will be rebuilt. According to press reports, the planning process and new construction can take up to 12 or 15 years.

All operational changes can be seen on RNV’s official website: https://www.rnv-online.de/fahrtinfo/verkehrsmeldungen/umfangreicher-umleitungsverkehr-in-ludwigshafen-ab-27-november/

S-Bahn service: All trains on line 1 are now also stopping at Ludwigshafen’s Mundenheim and Rheingönheim stations since 25 November 2020. This is to offer commuters an alternative to the tram lines which are out of service.

Tram line 4 / 4A (Rhein-Hardt-Bahn): The tram runs from Bad Dürkheim to the main station in Ludwigshafen via Kaiser-Wilhelm-Straße. Via Rathaus Ludwigshafen it runs via the Kurt-Schumacher-Bridge to Mannheim. In Mannheim, the line runs via Paradeplatz to the castle and the main train station. From there, the train takes the regular route towards Waldfriedhof / Käfertaler Wald back to Ludwigshafen.

Tram line 6 / 6A: The branch between Rheingönheim and Berliner Platz is out of service. The changed route of line 6 leads from Ebertpark via Rathaus LU to Mannheim Neuostheim.

Separation of tram line 7: In Ludwigshafen, line 7 runs from Oppau – BASF – LU Rathaus – Ludwigstraße, from here via LU Hauptbahnhof to Ebertpark and back.

Tram line 9: The trams run from Bad Dürkheim to the main train station LU via Kaiser-Wilhelm-Straße and Rathaus LU to Kurt-Schumacher-Brücke. In Mannheim it runs over the Paradeplatz to the castle to the main station. From there, it takes the regular route to Luisenpark / Technoseum

Tram line 10: Tram line 10 will remain closed until further notice, as the northern route in Friesenheim will be completely rebuilt by the end of 2022.

In order to introduce the rush hour service between Ebertpark and Oppau from 7 January 2020, the remaining RHB Düwag trains were reactivated. These are GT6 (ET6) trams with six-axle trailer cars (EB6), which were built at Düwag in 1963: 1015 + 1055, 1017 + 1057 and 1018 + 1058. Ironically, the decision of reactivating those was taken in the very last minute , since the 1015 and 1018 pairs had been out of service for 10 years and were planned to be scrapped in 2019. The 1017 with its trailer car were still used annually at the Mannheim Maimarkt. For the new operation, the trains were refurbished for around 400,000 euros and were given a new white livery with an orange trim and “Düwag trim” on the front of the vehicle and a blue trim on the bottom edge.

Two trains each run in the morning and afternoon rush hour. One cycle also leads to their former route of the Rhein-Haardt-Bahn to Bad Dürkheim and from Mannheim to Ludwigshafen. As soon as the viaduct is removed in summer 2020, the Düwag trains will go into service on line 6E. The Düwags will therefore be used in Ludwigshafen and Mannheim at least until 2021. Then the first of the 80 new RNT 2020 low-floor trains from Škoda Transportation are to be delivered in order to replace the Düwag ET6 and EB6 as well as the Düwag 6MGT low-floor trams from 1994/ 1995.

Due to the Corona crisis, timetables in the Rhein Neckar network were changes. In addition, the track work of tram line 7 to Ludwigshafen Oppau in Carl-Bosch-Straße are replaced, which is why there will also be bus replacement traffic until 19 April. The old Düwag trams will therefore probably only be used again after the Corona crisis.

In Brandenburg / Havel, the full closure of the „20. Jahrestag“ bridge was a major challenge for public transport operator VBBr: After the bridge was closed due to its state, from Friday, 6 December 2019, tram operations on line 2 to Quenzbrücke were closed and replaced by buses. There were also some changes for the bus lines. Decommissioned buses were brought back to Brandenburg for rail replacement.

What will happen to tram line 2?

The future of the Brandenburg tram was repeatedly discussed in the past. After the closure of the suburban tram line to Kirchmöser in 2002, the tram network shrank to three lines with a network length of only 16 km. It is no wonder that citizens and tram enthusiasts are (again) worried about the future of their beloved tram in Brandenburg.

The first question is whether the bridge will be rebuilt or even a ground-level crossing with the railway line to Rathenow will be built. Secondly, how can the tram be integrated integrated into this scenario? From a technical point of view, there are solutions. Brandenburg’s mayor, Steffen Scheller, has already spoken in favor of tram line 2. If line 2 were abandoned, the cost-benefit ratio for the entire tram network would go down.

Furthermore, the future of the Brandenburg tram is secured insofar as the VBBr will order ten new low-floor trams for 28 million euros as part of a joint tender with the cities of Cottbus and Frankfurt / Oder. The decision is expected in spring 2020.