RVK Cologne and WSW Wuppertal investing together in hydrogen 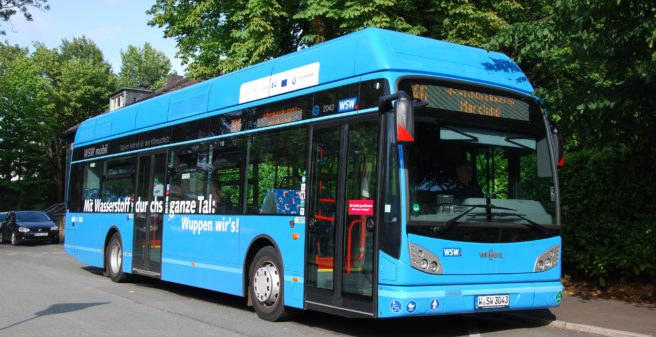 In 2019, operators Regional-Verkehr Köln GmbH (RVK) and Wuppertaler Stadtwerke GmbH (WSW) jointly ordered a total of 40 Van Hool New A 330 FC fuel cell buses from the Belgian bus manufacturer Van Hool. 30 buses will be delivered to RVK and 10 vehicles to Wuppertal. The idea behind the joint order is simple: the more vehicles you order, the greater the resulting “scale effects” per bus. The approach is certainly interesting as long as emission-free buses have a higher capital cost than standard diesel vehicles.

Van Hool is one of the European bus manufacturers with the longest experience in the production of fuel cell buses: Since 2007, hydrogen-powered buses have been regularly delivered to the USA. Van Hool has therefore over 13 years of experience with this technology. May be this is even means that Europe has been too hesitant with the introduction of fuel cell technology?

Why hydrogen buses in the greater Cologne area and in Wuppertal ?

a) the operator Regionalverkehr Köln – RVK

A few years ago, Eugen Puderbach, head of Regionalverkehr Köln until the end of 2020, told the author of this report: “We want to drive our buses – not least to protect the environment – with electricity. However, to give just one example, we cannot set up a recharging station for the batteries in any remote location in the Eifel region at the end of our bus route. No one can pay for that. So if we want to drive electrically, we have to come up with something else.”

Puderbach gave a simple solution: “We drive with hydrogen. We can do it in an economic way in the greater Cologne area because it is produced in the chemical industry in the region (Hürth, Cologne and Leverkusen) as a “by-product” that no one could have used so far. Which is why it was simply destroyed by flaring.”

b) the Wuppertaler Stadtwerke – WSW

At the electric bus conference of the Association of German Transport Companies (VDV) in Berlin in February, WSW boss Ulrich Jaeger explained the hydrogen concept of Wuppertal WSW as follows: “Next to our bus depot at Nextebreck the Wuppertal waste incineration plant is located which is also part of the WSW Corporation. Here we generate electricity from waste incineration. And we are now using it to generate hydrogen, which our buses will then use. Because we generate the hydrogen ourselves with our own electricity, there are no transport costs – the waste incineration plant and the bus depot are directly adjacent to one another – our buses could not be using a more economic fuel. And at the same time, they also drive in an absolutely environmentally friendly way.”

RVK as a hydrogen pioneer

Regionalverkehr Köln put its first two hydrogen buses into service in 2011. Under bus numbers 10 and 100, two 18-meter articulated buses of the “Phileas 18” type from the Dutch manufacturer APTS (Advanced Public Transport Systems) were used. Both were refueled with hydrogen from the “Chempark Hürth”, and because their gas station was located here, they were also used in the Hürth area. They were therefore operated on the Huerth city lines 711 to 714 and also on RVK line 960 (Hürth Mitte – Cologne Central Station).

In addition to its electric drive, the APTS Phileas was full of technical innovations. It was only fitted with independent tires on all three axles, and all wheels could be steered. This made it possible to approach the stop absolutely parallel to the curb in a “parallel shift” even if the access was sometimes actually blocked by illegally parked cars.

The Phileas had a problem that has completely new technology: it suffered from teething problems, and unfortunately not a little. Eventually, APTS also went into bankruptcy … (A pity about the fantastic ideas that were in Phileas.)

The RVK was not discouraged. In 2015 two new hydrogen buses came with the 400 and 500 buses, this time from the Belgian manufacturer Van Hool who already had some experience with hydrogen buses because he has been exporting hydrogen buses to the USA as mentioned above. For weight reasons, the two buses still had to be three-axle vehicles … They were and are still operated mainly on the city bus routes of the two neighbouring cities of Brühl and Hürth. They are fueled in the Chempark in Hürth, and they are stored and maintained at the RVK depot in Hürth. When the 2017 World Climate Conference took place in Bonn, the buses ran on a special line in Bonn for the duration of the conference.

The joint order from RVK and WSW

RVK was and is satisfied with its two hydrogen Van Hool. So last year a large delivery of 30 new hydrogen buses was put out to tender, and Wuppertal’s WSW “hooked up” with ten buses. Van Hool emerged as the winner of the tender. Van Hool offered (apparently) the same type that was delivered in 2015: the “New A 330 FC”. But there is a very important difference: as we saw above, the “Van Hool New A 330 FC” from 2015 is a three-axle vehicle for weight reasons, but by 2020 the Belgian manufacturer was able to reduce the weight of the bus so that it only needs two axles today.

Operation of the new hydrogen buses

The filling station at the Meckenheim depot (near Bonn) only has to be supplied with hydrogen by a tanker truck. But here too, the operator is thinking about taking over the operation of the airport line “SB 60” (Bonn main station – airport Cologne / Bonn via the motorway A 59) from the SWB and then using the hydrogen buses on this line, which then could also fill up at the airport.

Due to the location of the Nextebreck depot in the extreme north-east of the Barmen district, WSW’s hydrogen buses are used in the Barmen area, the central point in the route network being the “Alte Markt”. The press office of the WSW names the lines on which the fuel cell buses are used: lines 640, 644 and 646.

The author’s driving impression is limited to the short Huerth city line 720 and the Wuppertal line 646. In both companies the drivers expressed their satisfaction with the hydrogen buses. A driver in Wuppertal: “You have to drive the hydrogen bus very differently to a diesel bus in order to recuperate electricity, for example when braking.”

But in Wuppertal it is not really the case. It is just in the narrow valley of the Wupper, otherwise it goes steeply up the mountains to the left and right. And the way the Van Hool New A 330 FC accelerates and sprints up the mountaints … every diesel is left ashamed.

New order for delivery in 2021

RVK and WSW are so convinced of the hydrogen bus that they have long placed a new order for fuel cell buses. For the RVK, there are now 26 new buses, for the WSW again ten. But the new tender produced a different result than the first: this time the most economical offer came from the Polish-Spanish manufacturer Solaris for its “Solaris Urbino 12 hydrogen” type.