Salzburg: The end of service for the first generation of low-floor trolleybuses 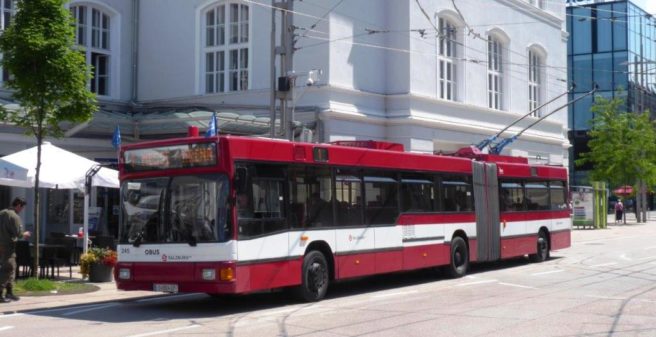 In the 1990s Gräf & Stift/Kiepe Electric developed a first generation of low-floor trolleybuses for the Austrian, German and Italien market, branded as model NGT 204. The prototype of a total of 102 trolleybuses was todays Salzburg 229, entering service in autum 1994. For 27 years these NGT 204 trolleybuses were a backbone of Salzburg‘s fleet.

Between 1994 and 1997 Gräf & Stift/Kiepe delivered 22 of them to Salzburg, joint by another after the closure of MVG Kapfenberg‘s system in 2002. They were numbered 229-252 (without no. 239, and 240 ex Kapfenberg). Further trolleybuses of this type, in different lengths, were delivered to Innsbruck (10), MVG Kapfenberg (1), Eberswalde (15) and with Autodromo bodies to Modena (10), Milano (8) and Bologna (35) – some of them being still in service as the second hand acquisitions from Salzburg and Eberswalde operatig in Iwano-Frankiwsk (Ukraine) and Budapest (Hungary). Together with 14 similar two axle trolleybuses for Parma and one almost identical prototyp for Bucharest 116 of this type were built and set a standard for many trolleybus sytems with low-floor technique.

In the first weeks of July 2021 the last NGT`s of Salzburg fleet will be the last time in regular service. Maybe one or another will be kept in stock a a reserve- depending on the performance of the new Hess/ABB trolleybuses being delivered during summer 2021. No. 233, 236 and 245 are the last of the series in daily service. Originally there was the plan to keep Salzburg 236 as a historic trolleybus, but at the moment the situation of Salzburg`s historic fleet is unclear at the moment.