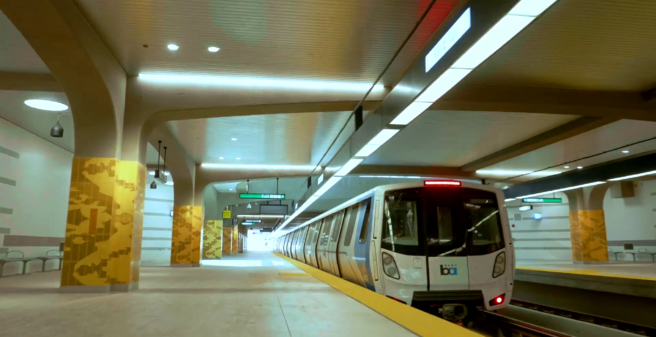 The rapid rail system BART (Bay Area Rapit Transit) serves a the area around San Francisco Bay in California and crosses the Bay itself by means of a 5.8 km long tunnel. The system connects San Francisco with the cities of Oakland, Berkley, Richmond, Pittsburg, among others. Since last Saturday 13 June 2020 the first section of the long awaited first step of the connection to the area of San José, centre of the well-known Silicon Valley, was finally opened to the public. This adds another 16 km to the now 190 km long network.

The new stretch runs entirely on surface, at grade, as open cut or on an elevated aligment. It has only one intermediate stop at Milpitas where it connects to San José’s light rail system Santa Clara Valley Light Rail operated by the Santa Clara Valley Transportation Authority (VTA). Terminus of the BART line is at Beryessa/North San José. VTAbuilt and owns the extension including the two new transit centers. BART will operate the service and maintain the system.

Construction work on the extension to San José, also referred to as „BART Silicon valley“, already begun back in 2012, but several delays prevented the opening at an earlier stage. A further extension via downtown San Jóse, San José Diridon Station to a new terminus at Santa Clara, adjacent to the existing Caltrain station, is planned – with start of construction not before 2022 – and will open at a later stage. This section will be entirely underground and can certainly contribute to create additional passenger demand.

BART Silicon Valley are part of a gradual expansion plan for the BART system. The intial network of approximately 115 km opened between 1972 and 1974, a further 51 km of new routes were added between 1995 and 2003. The new section is an extension of BART’s very first line to Fremont opened on 11 September 1972 which had already been extended by 7.6 km from Fremont to Warm Springs/South Fremont on 25 March 2017.

and a network map: http://www.urbanrail.net/am/snfr/sf-bay-area-map.htm