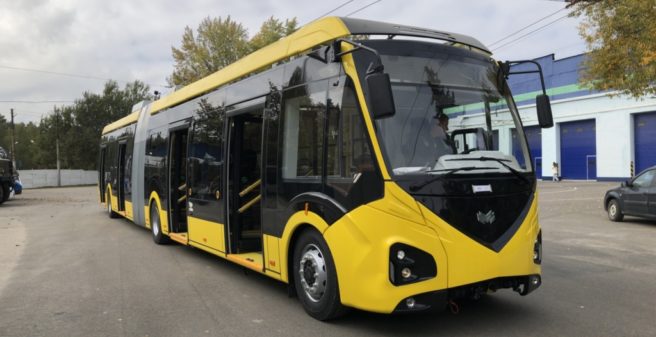 The public transport infrastructure of Sarajevo, the capital of Bosnia and Herzegovina, is currently in the process of being comprehensively modernized with EU funds. In addition to 15 new, three-section low-floor tramcars to be supplied by Stadler Rail in 2023 and 2024, 25 new articulated low-floor trolleybuses have been ordered from the Belarusian manufacturer BKM Belkommunmash.

The first of these „BKM 43300D“ trolleybuses are scheduled to arrive in the Bosnian capital at the turn of the year. These vehicles are battery-articulated trolleybuses, which are also able to cover streches of the route off the existing overhead network thanks to a powerful traction battery pack. 20 km is this additional range in battery mode. The European Bank for Reconstruction and Development has approved a development loan to finance the purchase by approximately EUR 14 million.

The first new trolleybus is largely completed and has now been presented to representatives of the capital region of Sarajevo – including Prime Minister of Sarajevo Canton, Edin Forto, and the Minister of Transport, Adnan Šteta – at the factory yard near Minsk. The series was ordered in January 2021 and delivery should be completed by the end of 2022. They will largely replace the second-hand trolleybuses mainly operating today. The reopening of the trolleybus line to Vogošća, which has been shut down since the end of the Bosnian war, is also under preparation – the procurement of another 10 trolleybuses has been announced for this purpose, provided the necessary funding becomes available.

Both the tramway and the trolleybus still suffer the consequences of the difficult economic situation since the end of the Balkan war. This includes the use of only second-hand vehicles on the six trolleybus lines for many years already. In April 2019 and January 2020, 14 HESS SwissTrolley2s from Bern started service in Sarajevo introducing low-floor comfort on the network. These vehicles are „only“ 20 and 23 years old while all the other services are provided by 30-year-old high-floor articulated trolleybuses from Geneva, and one single remaining three-axle MAN SL172HO ex Solingen, built in 1987. All other ex-Solingen trolleybuses and also the articulated trolleybuses from St.Gallen are out of service. The operator had used second-hand vehicles from Esslingen, Solingen, Arnhem, Pardubice, Marianske Lazne, St. Gallen and Geneva for more than 20 years. It had opened in 1984 for the Winter Olympics in the city with a fleet of Czech Skoda trolleybuses.